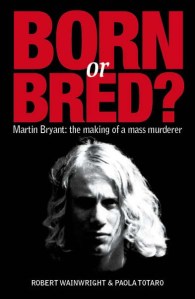 What makes one person go on a killing spree? Are they genetically pre-conditioned to commit such an atrocious act? Or is it the way they have been brought up? Is it nature — or nurture?

In Born or Bred?, the story of the world’s worst massacre by a lone gunman, the authors tackle these difficult, although somewhat clichéd questions, and try to come up with a theory as to why Martin Bryant carried out the atrocity for which he was responsible: the slaughter of 35 innocent people at the Port Arthur tourist site in Tasmania on April 28, 1996.

Of course no one will ever truly know why 29 year-old Bryant did what he did. I’m sure Bryant, who will spend the rest of his life behind bars, does not have a full explanation for what he did either. But this book, written by two highly experienced journalists, attempts to look behind the crime and to examine Bryant’s life in the search for clues. In their introduction they write:

This book is an attempt to delve beyond what we think we know about the crime, to place events in context and to provide an answer not only to why this horror might have unfolded but what possibilities we now have, thanks to neuroscience and greater understanding of the human psyche, that might give us a chance to prevent a recurrence — or at least lessen the chances of it happening again.

This might sound like a pretty straightforward approach to adopt, but Wainwright and Totaro had an uphill battle to get this book written, not least because the Tasmanian Government has had a “media blackout” in place about the incident. In 2001, it went a step further by placing an exclusive embargo on Bryant, preventing any information about the man being disseminated via the media.

The authors figured they could get around this by writing the book from Bryant’s mother’s point of view, but she eventually fell out with them, and they had to start from scratch.

There will be many people who will see Born or Bred? as a ruse to make money out of a horrendous crime. But the story is very sensitively handled (remember, it was written more than 10 years after the event), to the point where the actual killings are recounted at the rear of the book in a specially marked off section “to give readers the choice of avoiding graphic violence”. ( I initially thought this was somewhat odd, but with hindsight I can see that it has been done like this for a reason, even if that reason might have been to convince the publisher that this wasn’t a book shamelessly exploiting the crime for the sake of it.)

As a piece of narrative non-fiction, the book is well written, fast-paced and rich in detail. It provides a gripping account of one man’s life and unearths the stories of his ancestors to show how his story cannot be taken in isolation. It particularly focuses on Bryant’s oddness as a child and the ways in which his parents attempted to address his mental and social problems in different ways — his mother was remote, his father hands-on. Neither approach seems to have worked.

Interestingly, a prison doctor later diagnosed Bryant with a form of autism known as Asperger’s syndrome, but the authors are quick to point out that while it might explain his abnormal behaviour as a child it “does not explain his actions as an adult: people with Asperger’s are not potential mass killers”. But Professor Paul Mullen, a British-born, Melbourne-based psychiatrist, who assessed Bryant’s state of mind to see if he was fit to stand trial, disputes this diagnosis. He claims that Bryant was “profoundly socially disabled” not autistic.

So, if his mental problems alone are not enough to cause him to go on a killing spree, what else contributed to this callous act of violence?

The authors are able to demonstrate how a series of events, in combination with Bryant’s mental and social problems, lead to that fateful day. Their case is a convincing one. And while I won’t recount it in detail — you need to read the book if you want to know more — it’s clear that the suicide of Bryant’s father and Bryant’s access to money played a strong role.

The $64 question in my mind was exactly that: how on earth did Bryant afford the $10,000-plus he spent on guns and ammunition referred to in early chapters of the book? Little did I know he had inherited a fortune (literally) from a kooky heiress he had befriended. Helen Harvey was related to the founder of the Tattersall’s lottery in Australia and when she died in a car accident (in which Bryant was also involved) her riches passed to him. Without that money it is impossible to see how Bryant would have amassed such an arsenal — there were firearms and ammunition hidden in various places throughout his house, including shot-guns, semi-automatic weapons, a telescopic sight, an ammunition belt and dozens of cartridges in boxes and bags.

The prime message from this book is not that Martin Bryant was “evil” and hell bent on killing as many people as he could on one day, it is that it might have been prevented had he received appropriate psychiatric care from a young age. (It might also have been prevented if someone stopped to chat to him enroute to Port Arthur that day: he made three stops at petrol stations, for seemingly pointless reasons, as if he was willing someone to end his journey.) He gave out all the signals that he was abnormal as a child and yet his parents, his educators and his doctors failed to deal with the issue properly, perhaps because information about mental health was lacking or the resources were not there to assist. The issue, of course, is not black and white. His life experiences and current circumstances contributed.

The final word goes to the pyschiatrist who assessed Bryant’s state of mind in the aftermath of the killings:

4 thoughts on “‘Born or Bred? Martin Bryant: The Making of a Mass Murderer’ by Robert Wainwright & Paola Totaro”