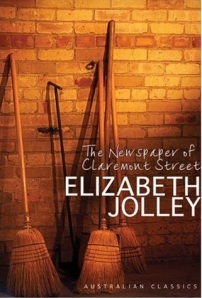 In the delightful black comedy Mr Scobie’s Riddle, which I read last year, Elizabeth Jolley had much to say about the lack of respect society has for those we brand “old folk”. In The Newspaper of Claremont Street, first published in 1981, she has a lot to say about the way in which we tend to view the working class.

Despite its title, the story is not about a newspaper but tells the tale of an old cleaning woman who is nicknamed ‘Weekly’ or ‘The Newspaper’. This is because she works in so many different houses that she picks up gossip and is able to pass it on just like a tabloid newspaper.

Though she knew of accidents and weddings, births and deaths and told the news from one house to another, she never spoke of things that really mattered. About these things Weekly held her tongue. […] Weekly knew which wives didn’t want their husbands to come home for lunch; she heard sons snarling at their mothers and ungrateful daughters banging bedroom doors. She heard the insincere voices and laughter in telephone conversations and she wondered how friends could be so treacherous to one another, so watchful over the successes and failures of each other’s children.

Along with her discrete nature, Weekly is a hard worker. Even before she’s left her room in a local boarding house, she’s scrubbed and cleaned and made everything spic and span. She then spends the rest of the day, and often the evening, cleaning the homes of the doctors, lawyers, architects and millionaires who live on Claremont Street.

Her strong work ethic is only matched by her ability to save her pennies. Indeed, Weekly is motivated to keep working — despite the agonising hours, the exhaustion and her aching bones — by the promise of creating an “exquisite cone-shaped mountain made entirely of money, with a silver scree of coins on its steep sides”. She plans on using this money to buy a second-hand car and then, a little later, a property of her own in the country.

Of course, the story wouldn’t work without some narrative tension, and this arrives in the form of a Russian widow, who Weekly “adopts” and memories of an older brother with whom she had a troubled relationship.

Told in simple, elegant prose, The Newspaper of Claremont Street, feels like an easy-to-read fable with a comic touch. But underneath the spareness lies a macabre streak. Weekly might be hard-working and slightly eccentric, but she cannot be taken at face value…

8 thoughts on “‘The Newspaper of Claremont Street’ by Elizabeth Jolley”