Joseph has seven novels to his name — Cowboys and Indians (short-listed for the Whitbread Prize), Desperadoes, The Salesman, Inishowen, Star of the Sea, Redemption Falls and Ghost Light — as well as a number of bestselling works of non-fiction. He has also written film scripts and stage-plays, including the award-winning Red Roses and Petrol.

He broadcasts a popular weekly radio diary on RTE’s Drivetime With Mary Wilson and writes regularly for The Guardian Review and The Sunday Independent.

His latest novel, Ghost Light, which has received rave reviews and topped the Irish best-sellers list for more than 9 weeks, has been selected for Dublin’s One City One Book initiative, in which everyone in the city is encouraged to read the same book during the month of April.

He was recently voted ‘Irish Writer of the Decade’ by the readers of Hot Press magazine.

I met Joseph on my last trip to Ireland, and over the world’s biggest pot of coffee talked about Ghost Light, literary influences and what it’s like to see giant covers of your latest novel plastered all over Dublin!

Mid-way through our chat, I asked him to nominate three books that mean a lot to him. He very graciously made his Triple Choice Tuesday selections on the spot. This is what he chose:

James Joyce’s Dubliners contains the most perfect short story ever written in the English language: The Dead. It’s about a couple of people going to a party in a house in Dublin on the 6th of January – it’s not even Christmas Night, it’s not even New Year’s Eve.

The story is a remarkable Joycean miracle, because it appears to be about nothing but you realise in the last paragraphs that it’s actually about everything. It’s about the deepest things that it is possible to write about – love and memory and desire, and how we can never really know the people we love and how we carry our ghosts, and how life is a process of adjusting and reaching a kind of agreement with the past.

And the prose is so beautiful, so memorable. I just think every single sentence in it is perfect. Joyce writes about that book that he was trying to develop a style that he called “scrupulous meanness”, that he would never waste a word, that he would be absolutely scrupulous because it was about putting the words in the right order.

It’s just a wonderful involving read that you can read again and again, and it reveals new pleasures every time you do so. I love Ulysses, but Dubliners is my favourite Joyce book. 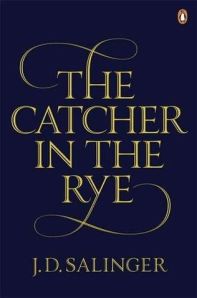 A book that changed my world: The Catcher in the Rye by J.D. Salinger

The Catcher in the Rye, JD Salinger’s great book, changed my world — and my life. I was a bookish kid and both my parents loved books, so by the time I was 16 or 17 I was a very keen reader. My first girlfriend’s parents had lived in America and they were very cool and had an air of raffish Bohemianism about them, and she gave me a book that her father loved, The Catcher in the Rye. I had never read anything like it in my life.

I remember it with the same kind of joy as I remember hearing the Sex Pistols for the first time. And I can remember the moment — I can probably date it — when I closed the last page of The Catcher in the Rye and I thought I would like to do that — write a book that would touch people and take them on a journey — with my life. It changed me from being a reader to an aspiring writer.

I still read it every three or four years. It has the hallmark of every great novel, which is that it changes as you age. The first time you read it as a teenager you love the humour and the fact that Holden Caulfield is so cheeky and irreverent and so fucking smart and he’s got all the answers. And you love that opening paragraph when he talks about that “Charles Dickens crap” because all the stuff you’re reading at school is the Charles Dickens crap.

And then, when you read it when you’re a bit older and you’re a parent, you see the great grey darkness and sadness in the book and you want to put your arms around Holden and mind him, you want to step through the prose and tell him that everything’s going to be all right.

The book that deserves a wider audience: The Journey Home by Dermot Bolger

The Journey Home, first published in 1990, is a masterpiece. I wouldn’t be writing myself if it wasn’t for this book.

Roddy Doyle’s The Commitments came out around the same time.  Both books just opened up such doors to me, because they were the first books I came across where people were writing about an actual place called Dublin, not a stage set they’d inherited from the works of Joyce, with that funny little photogenic Dublin of gaslight and parasols. Suddenly, along come Roddy and Dermot, and they kind of blow the doors off that particular theatre, and they both, in their different ways, write not about the two great places of Irish literature, the city and the country, but instead write about where most of us live — the suburbs.

And they’re brilliant about the unofficial goings on in this society, which of course pretends to have its fealties  to the church and conservative politics, but deep down, at grass level, other things are happening. And I think that Dermot is just the laureate at capturing that.

Poet Paul Durcan once said about Dermot that he’s Dublin’s Passolini, and I really think he is. I love all of his books. He has a readership in the UK, and in Europe too, where he’s been translated. But the Journey Home was only published in the United States in 2008. It got the front cover review in the New York Times Book Review section.

He’s a really important writer, and a beautiful stylist. I love his characters, I love the honesty of his work, and his incredible creative imagination. He’s a poet, he writes for the theatre, he works as a publisher. There are very few Irish writers who Dermot has not helped at some point, he’s a wonderful man and he’s a national treasure, and I’d love his books to be known all over the world.

The Journey Home is as important as James Joyce’s Ulysses or as Joyce’s Dubliners or Roddy’s The Commitments, for what it reveals, and the permission it gave to subsequent generations of Irish writers, to write about what is actually in front of you. [He effectively said] open your eyes, wake up! The stories are actually there and all around you, like the birds. If you open the windows of the dusty old house of Irish literature and reach your hands out, the birds will come to you…

Thanks, Joseph, for taking part in my Triple Choice Tuesday!

I’m delighted to say that I’ve read all three, and had only just finished The Journey Home a few days before this interview took place. Indeed, I had chosen it for my book group. I agree that it’s a wonderful book, which deserves a wider audience, because while it’s a challenging read it offers up a view of Dublin life not really told before, of what it’s like to be cast adrift in the suburbs, going from one crappy job to another, all the while trying not to get sucked into the world of drugs and corruption.

What do you think of Joseph O’Connor’s choices? Have you read any of these books?