Today’s guest is Yvann from the blog Reading, fuelled by tea.

Yvann, who is Australian, lives in London with her husband and her cousin (“who seems to have moved into the spare room permanently”).

She started blogging in 2009 to record her pre-wedding diet of classic literature rather than calorie limitations, but it has now become a daily escape from the corporate accounting world in which she works. Yvann says that she specialises in cramming ever more books into her one six-foot bookcase!

I am glad this category is worded in such a way permits a plethora of favourite books! Bel Canto touches on two subjects very close to my heart — opera and translation. Patchett manages to convey what I have never managed to describe adequately — the incredible power that a beautiful soaring voice can have, the ability of music to repair the heart and soul. Not only does she achieve that, she also muses on the translator as a tool, everybody’s mouthpiece but his own; the beauty of languages and how empowering it is to float between them at will.

A book that changed my world: Anne’s House of Dreams by Lucy Maud Montgomery

I was about eleven when I finally succumbed to Anne of Green Gables. This is the fifth book in the series, the one in which Anne marries, moves away from Avonlea permanently, and the first in which she could be called a woman, rather than a girl. It was the first book to show me that sometimes bad things happen to good people — not someone old dying at the end of a full life, or a villain coming to a sticky ending, but heart-breaking tragedy in the life of someone who doesn’t deserve it. Now that I have my own “Flat of Dreams”, I am intending to re-read this regularly. 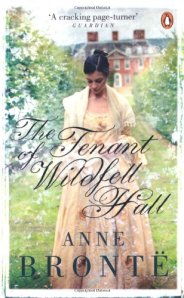 A book that deserves a wider audience: The Tenant of Wildfell Hall by Anne Brontë

Everyone reads Charlotte Brontë’s Jane Eyre and Emily Brontë’s Wuthering Heights, and most people love one or the other (for me, Jane is better, but Emily’s writing is still pretty amazing) — but no one seems to read Anne Brontë’s novels. The Tenant of Wildfell Hall has been described as one of the first feminist novels, but that’s only part of why I love it. Anne writes with an ease and lack of pretension that both her sisters lack, and the titular tenant’s struggle between being a good wife and being true to herself is something that resonates today (although thankfully her situation is rare).

Thanks, Yvann, for taking part in my Triple Choice Tuesday!

I read Bel Canto many years ago (my review is here) and think I am probably the only person in the universe who didn’t like it! But I did love the Anne of Green Gables series, which I read in my childhood and remember loving, although I cannot recall any of the detail. The Tenant of Wildfell Hall has been promptly added to my wishlist; I read Charlotte’s Jane Eyre earlier this year and adored it.

What do you think of Yvann’s choices? Have you read any of these books?