Tom’s debut novel, The Imperfectionists — which I read and reviewed last year — sold more than 400,000 copies in hardback during 2010. It’s an endearing story set in Rome and revolves around 11 eccentric characters working for an English-language newspaper that is experiencing a decline in both its advertising revenue and circulation.

Foreign language rights to the book have been sold to 25 different countries; the film rights have recently been optioned by Brad Pitt; and the Oscar-nominated Scott Silver (The Fighter) has been tasked with developing the screen-play.

Later this week (July 29), the book will be released in paperback here in the UK.

Tom was born in 1974 in London, but grew up in Vancouver. He studied cinema at the University of Toronto and completed a Master’s degree in journalism at Columbia University in New York.

From 1998, he worked as an editor at the foreign desk of The Associated Press in New York, then did a stint as a reporter in India and Sri Lanka, before returning to New York.

In 2002, he was sent to Rome as an AP correspondent, with assignments taking him to Japan, South Korea, Turkey and Egypt.

In 2006, he began working part-time as an editor at the International Herald Tribune in Paris to support himself while writing fiction. He now lives in London, where he is working on his second novel.

A favourite book: On the Black Hill by Bruce Chatwin

Bruce Chatwin is a novelist whose admirers are so passionate as to be astonished when their ardour is not universally shared. He is still widely read and respected, but my impression is that much of the attention goes to his travel books In Patagonia and The Songlines. In my view, it is two novels – On the Black Hill and Utz – that are his masterpieces, each among the finest 20th century novels. For the sake of this posting, I will pick one of them, On the Black Hill, whose subject is the undistinguished lives of Welsh twin farmers. Not overly promising material. But this brief novel is exquisite, perfectly composed, humane and insightful; too true to be fiction. I hope someone who reads this post will read it. 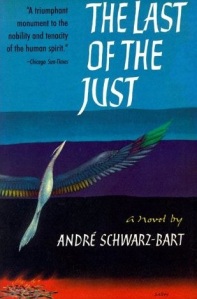 A book that changed my world: The Last of the Just by André Schwarz-Bart

The Last of the Just stirs my nostalgia and a wince of shame, too. The nostalgia derives from the power it had when I was a teenager and more inclined to movies and magazines than to novels. This book changed that with its scope and power, recounting a Jewish legend through a single family line from the 12th century to the Holocaust, capturing not just a single protagonist or even a single milieu, but generations. My wince of shame derives from the fact that I remember too little of the contents. I was heartened when recently reading a book by a memory-contest champion (Moonwalking with Einstein by Joshua Foer), who admits that even he forgets large stretches of what he has read. Still, this book imprinted a deeper mark than memories alone – it stirred me to want to write, and so shaped my life that followed.

A book that deserves a wider audience: The Upright Piano Player by David Abbott

Rarely does a novelist debut in his seventies, and something left so late might threaten to be less than urgent. But this first novel by Abbott, an advertising executive in younger days, is so powerful that I wonder if he cheated readers by not writing fiction earlier, or if such a novel could only have come by the accumulation of years. It tells of a lonely and emotionally blocked man, a retired executive himself, who faces the irredeemable guilt of having inadvertently caused the death of his grandson. The prose is restrained, the material tragic. At times, I feared the next chapter because the atmosphere was so distressing. I hope Abbott gains a wider readership and is spurred not to wait so long before publishing his next.

Thanks, Tom, for taking part in my Triple Choice Tuesday!

All of them sound wonderful to me, especially Chatwin’s novel, because I am one of those people that is more familiar with his travel writings (I read Songlines years ago and enjoyed it). I also very much want to read The Upright Piano Player ever since I saw David Abott interviewed on The Culture Show’s 12 of the Best New British Novelists edition. I was amazed that someone in their 70s could be a debut novelist. There’s hope for me yet!

What do you think of Tom’s choices? Have you read any of these books?