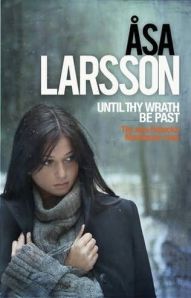 I remember how we died.

So begins Åsa Larsson’s haunting Scandinavian crime thriller Until Thy Wrath Be Past (the title refers to a passage from the Book of Job).

Set in rural Sweden, it tells the story of two teenage lovers who disappear while diving in a secluded —and frozen — lake one winter’s day. Their bodies are never found, but the beyond-the-grave narrator, who begins the book, reveals that they met with foul play.

When Wilma Persson’s body surfaces in the River Thorne, far from the lake, during the spring-time thaw, the authorities assume she simply drowned. But why are her lungs filled with water from a different source? And why is there green paint underneath her fingernails?

Enter prosecutor Rebecka Martinsson and police inspector Anna-Maria Mella, two “alpha females”, who launch an investigation into the girl’s death and a hunt for her boyfriend’s body.

This fast-paced narrative, which begins on April 16 and concludes on May 3 (the dates act as chapter headings), is largely told in the third person. But early on in the novel, the voice of Wilma, the dead girl, butts in:

I go to visit the prosecutor. She’s the first person to see me since I died. She’s wide awake. Sees me clearly when I sit down on her bed.

Admittedly this supernatural element* may not appeal to all readers, but it gives the story an added dimension: that of the victim, who can tell her version of what really happened. And it also gives us, the reader, a vital piece of information that the police know nothing about: the pair had discovered a plane at the bottom of the lake, a plane that had been carrying supplies for the Wehrmacht in 1943.

As it turns out, the investigation’s success hinges on the discovery of the plane — and its reason for being there. Larsson uses this to devastating effect, by interleaving the narrative with flashbacks to the Second World War in which Sweden collaborated with the Germans. (This seems to be a recurrent theme in Swedish crime fiction.)

What particularly makes this novel work is not just the superb characterisation (both Martinsson and Mella feel like real flesh-and-blood women, one of whom juggles motherhood with her career, another who is trying to make a passionate but complicated long-distance relationship work), but the subsidiary plot lines — the police dog-handler has an unrequited “thing” for Martinsson, which is strangely moving — and the way in which Larsson keeps the momentum, and the suspense, on overdrive. She is excellent at what I call the foreshadowing effect, giving us little clues that bad things are going to happen up ahead. For example, after one character makes what seems like an innocent phonecall to a neighbour, she writes:

He cannot know what a terrible mistake that is. What consequences that telephone call will have.

And of course it wouldn’t be a proper Scandinavian crime novel without plenty of moody and atmospheric descriptions:

A week passes. Snow crashes down from the trees. Sighs deeply as it collapses into the sunny warmth. Bare patches appear. The southern sides of antills heat up in the sun. The snow buntings return. Martinsson’s neighbour Sivving Fjallborg finds bear tracks in the forest. The big sleep of winter is over.

Until Thy Wrath Be Past is a terrific thriller, and while it’s part of the “Rebecka Martinsson crime series” of which there are three previous novels, it can be safely read as a standalone. I found it to be a heart-hammering read — the first chapter is one of the most exciting first chapters I’ve read in a long while — with a multi-layered plot and a satisfying, if slightly Hollywoodish, ending.

* If that’s not your kind of thing, it might help to know the girl’s first-person account begins to wane the further you get into the book.

8 thoughts on “‘Until Thy Wrath Be Past’ by Åsa Larsson”