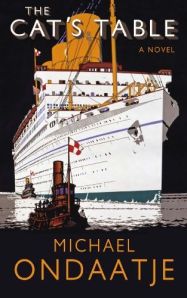 Going by the cover image of the UK edition of Michael Ondaatje’s The Cat’s Table — the Canadian version is slightly more understated — anyone would think this was a story set on a ship. In fact, if you read the first 100 or so pages of this novel you’d probably think this was a fair assumption to make.

But Ondaatje gives the book a twist mid-way through, which suggests this story is really about the transformative journey we all make from childhood to adulthood. The ship is merely a metaphor for a rite of passage.

In some ways, The Cat’s Table is a novel of two halves. The first is set on an ocean-liner — the Oronsay — bound for England from Ceylon (before it became Sri Lanka) in the early 1950s, and the second is the long-lasting effect that three-week journey had on an 11-year-old boy, who made the trip alone to be with the London-based mother he hadn’t seen for several years.

The story is narrated by Michael — nicknamed “Mynah” — who befriends two other young solo travellers, Ramadhin and Cassius, who sit with him on Table 76, the farthest from the highly desirable Captain’s Table.

“We seem to be at the cat’s table,” the woman called Miss Lasqueti said. “We’re in the least privileged place.”

As the ship ploughs its way across the Indian Ocean, the Arabian Sea and the Red Sea, before heading into the Mediterranean via the Suez Canal, Michael revels in his new-found freedom:

I had no family responsibilities. I could go anywhere, do anything. And Ramadhin, Cassius and I had already established one rule. Each day we had to do at least one thing that was forbidden.

Part of the excitement for the boys is the knowledge that there’s a prisoner on board — and they go out of their way to witness his night-time walks in which he is chained and shackled. At the other end of the social spectrum, the boys experience the upper classes for the first time — those that are travelling first class or dining with the captain — and what they see fascinates and occasionally appalls them by turn. (Racism is a recurring theme.)

But for the most part, they befriend the adults on their table — among them “Mr Mazappa and his musical legends and Mr Fonseka with his songs from the Azores and Mr Daniels with his plants” — and get drawn into their worlds, sometimes with dramatic consequences. Michael even develops a close friendship with his older cousin, who is travelling onboard, and experiences a sexual awakening without quite comprehending it.

Much of the early section of the book is told in short chapters focusing on specific passengers — pen portraits, for want of a better description — that allows you to build up a picture of what it was like on board and how much of an adventure it must have seemed for a young lad.

But the beauty of Ondaajte’s deeply reflective narrative, that ebbs and flows much like the waters upon which his ship is cast, is the way in which the adult Michael, looking back on his life, manages to figure out how the journey changed him as a person, how it shaped his outlook, his values and his relationships.

The three weeks of the sea journey, as I originally remembered it, were placid. It is only now, years later, having been prompted by my children to describe the voyage, that it becomes an adventure, when seen through their eyes, even something significant in a life. A rite of passage. But the truth is, grandeur had not been added to my life but had been taken away.

This not a plot-driven novel, nor is it a character-led one. But its interleaved storyline, switching between the past and the present, is strangely compelling — even with Ondaatje’s cool, detached tone (reminscent, I must say, of Ishiguro’s in Nocturnes: Five Stories of Music and Night, which I read last month) you want to keep turning the pages.

Despite its strengths, I came away from the book not feeling any great love for it. Perhaps it might be one of those novels that needs time to ferment in the mind a little longer than the four days between reading the last page and writing this review.

The Cat’s Table has been longlisted for this year’s Giller Prize. For another take on this novel please see KevinfromCanada’s review.

20 thoughts on “‘The Cat’s Table’ by Michael Ondaatje”