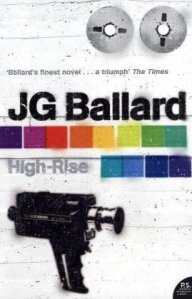 When the recent London riots were in full swing, much of the media commentary was peppered with the adjective “Ballardian”. According to Wikipedia, the term means:

Of or pertaining to the characteristic fictional milieu of author J.G. Ballard, typified by dystopian modernity, bleak artificial landscapes and the psychological effects of technological, societal and environmental developments.

Not having read any Ballard before, I decided it might be time to try, if only to understand why the term was being so liberally applied. I opted for his 1975 novel High-Rise, because it seemed to capture something of what happens to humans when the veneer of civilisation breaks down — and for a few days in August that’s what it felt like in London.

Of course, when I read the opening line — one of the most intriguing and spectacular I’ve ever come across —  I knew I had to buy the book:

Later, as he sat on his balcony eating the dog, Dr Robert Laing reflected on the unusual events that had taken place within this huge apartment building during the previous three months.

The building is 40 floors high and contains 1,000 apartments (Laing describes them as “over-priced cells”), a supermarket, swimming pool, gymnasium, bank, hairdressing salon, liquor store, restaurant and junior school. It has so many services that it is effectively a “small vertical city” and most of the residents have no need to leave the building, other than to go to work.

Laing, a senior lecturer in the physiology department of a nearby medical school, moves in to a studio apartment after his divorce, urged in part by his married sister, a resident on the 22nd floor, because she felt it would provide him with total privacy. Initially, he finds “something alienating about the concrete landscape of the project — an architecture designed for war, on the unconscious level if no other”, but later comes to enjoy the “pleasures of a subtle kind of anonymity”.

But  — as the opening line might suggest — all is not as it seems. The building is populated with well-to-do professional classes (“lawyers, doctors, tax consultants, senior academics and advertising executives”), who all appear to rub along together quite well. But the residents are divided into cliques and exclusive groups determined by their occupation and their position in the building — the higher the floor, the higher your standing on the social scale.

The residents might be highly respectable, but it doesn’t take much for petty grievances and little rivalries to come to the fore. (Anyone who has lived on a housing estate or an apartment building managed by a body corporate will find much to identify with here.) When rowdy parties start happening — a bottle of sparkling wine explodes on Laing’s balcony at 11am one Sunday having dropped 50 feet from above — it triggers a complete breakdown in the building’s social order.

Before long this fragile civility slowly morphs into a terrifying chaos in which men and women begin to behave like animals. Violence, looting and murder are not far behind. Ballard charts this social regression in painstaking detail from the perspective of various characters, including the building’s architect and a documentary film-maker.

As much as I admired the cool, rather detached tone of the novel, I found that it didn’t take long for the narrative of affluent residents turning into marauding, sexually depraved, warriors to wear thin.

And while High-Rise is just 176 pages long, I found it a mentally exhausting read, not because the prose is difficult, but because every page is crammed with Ballardian theories. The author has much to say about society in general, but his particular focus seems to be the way in which humans relate to one another when living in confined — and sterile — conditions. Indeed, he seems to suggest that it is not so much one’s social standing or wealth that affects your behaviour, but the urban environment in which you live. In High-Rise the building is the central character, a “huge machine” that looms large and dehumanises those who reside in it.

For that reason, I’m not sure the novel illuminates the causes of the recent riots. But as novel of ideas —  and a good book to discuss in a group — you would be hard pressed to find anything better.