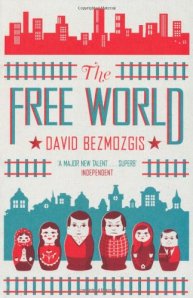 Imagine being stuck in a figurative “no man’s land”. You can’t return to the country you just left and you have no idea which new country will let you in. That is the dilemma experienced by the wide cast of characters in David Bezmozgis‘ debut novel, The Free World.

Set in the late 1970s, the book tells the story of a family of Russian Jews fleeing the Soviet Union. Samuil, the patriarch, isn’t convinced of the need to emigrate — “In the war you ran from the enemy. Now who are you running from?” — and he is even less convinced when his war medals are seized at the border as “property of the state”.

But to his wife, Emma, and their sons, Alec and Karl and their wives Polina and Rosa, it is a chance to start afresh in a yet-to-be-chosen destination. The choices are relatively limited: they can go to Israel, direct from Vienna — where the book opens — with no need for additional paperwork, or they can go to Rome, another transit point, and sort out documentation for the USA, Canada or Australia.

Alec isn’t sure which destination is best. He just knows he doesn’t want to go to Israel — and with good reason:

They had gathered at the office that morning to present themselves before a caseworker. The Joint would not furnish them with their stipend if they didn’t file papers for a destination. Rosa continued to agitate for Israel, even though two days before, Begin had officially rejected Sadat’s latest peace proposal. While in Beirut, the Syrians were shelling the Christians, and Israel was massing troops on its northern border. Alec, having successfully avoided the worst of Soviet military service, wasn’t aching to go from Ben Gurion Airport to boot camp. Getting killed or maimed in Lebanon, or Egypt, or wherever the bullets were flying, seemed to defeat the whole point of leaving the Soviet Union.

In the event, they go to Rome, but the decision about their onward destination is rushed. When they are forced to fill out their forms after waiting weeks for an appointment, Samuil is as grumpy as ever — “This is how you decide your family’s future, ten minutes in a stairwell?” — but even Rosa has her doubts.

—Just like that you’re prepared to go and say Canada? What do we know about it? Rosa continued. —What do we know about anyplace? Karl said. You watched the Olympics. You liked what you saw of Montreal. And in 1972 they also showed something of Toronto, Winnipeg, and Vancouver. —You’re talking about the hockey games? Rosa asked incredulously. —Da, da Canada; nyet, nyet Soviet, Alec said. —If you have nothing intelligent to add, Rosa said. —It’s more European than America, and more American than Europe. —What does that mean? Rosa asked. —It means, Alec said, that a person can eat and dress like a human being, watch hockey, and accomplish all this without victimizing Negroes and Latin American peasants. —Basically, Karl said. Their dollar is also strong. —It doesn’t concern you that we will have to stay for months in Italy? Rosa asked. —That’s a reason against Canada? —It’s something to take into account.

It is here, in Rome, that we are introduced to each character — Alec, the philanderer; Samuil, the grump with a painful family history; Polina, deeply troubled by having left her sister behind; Karl, the entrepreneur; Emma, keen to reconnect with her forgotten Jewish religion — and learn their complicated back stories. It’s almost as if under the strain of the immigration process, cast adrift in an alien environment, that each character must address the past before moving into the future.

I particularly enjoyed Samuil’s back story — in which we discover that his own father and grandfather were “trapped and murdered in their Ukrainian shtetl” — and Polina’s letters to the sister she left behind, which are equally moving and eloquent.

Bezmozgis’s strength is not on plot — there is little of that, perhaps mirroring the stasis of the family’s situation — but on character. Similarly, his detailed vignettes, some of which are deeply moving and others that draw on a rich seam of humour, are perfectly rendered.

He is also very astute at capturing that lovely sense of awe as his new immigrants move from the constricted lives of Soviet Russia to the wonders of the free world. This is summed up nicely when they go to the cinema to see a film adaptation of Fiddler on the Roof:

—It’s a wonderful production, a middle-aged woman behind them offered. Believe me. This is my eighth time watching. I’d watch it another eight times. In Russia, God forbid they should ever have a Jewish character in a film. But in America they made a whole movie about us.

The Free World has been shortlisted for this year’s Giller Prize. For other takes on this novel please see KevinfromCanada’s review and The Mookse and the Gripes’ review.

7 thoughts on “‘The Free World’ by David Bezmozgis”