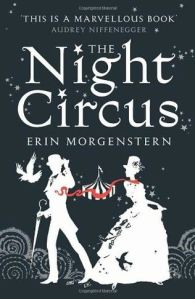 The circus arrives without warning.

So begins Erin Morgenstern’s debut novel, The Night Circus, which arrived with more than enough warning, actually — I received an uncorrected proof at least four months before the September publication date. The book has received a mighty marketing push — complete with a rather fun-filled London launch last month — on both sides of the Atlantic. One might wonder at the fuss, but it’s the type of novel that seems to have captured the imagination — of a lot of people in the book trade, at least. But this is also following through with readers, who love its sense of magic and wonder — or that’s what the Amazon reviews seem to indicate.

I’m going to be completely frank and say that the book isn’t what I would class as my usual cup of tea. But it’s such a fun novel and so playful and mischievous that any misgivings I had about the subject matter — I detest the circus and I’m not much of a fan of illusionists and magicians — were swept away by the enjoyment of it.

In this tent, suspended high above you, there are people. Acrobats, trapeze artists, aerialists. Illuminated by dozens of round glowing lamps hanging from the top of the tent like planets or stars. There are no nets. […] There are girls in feathered costumes who spin at various heights, suspended by ribbons that they can manipulate. Marionettes that control their own strings. Normal chairs with legs and backs act as trapezes. Round spheres that resemble birdcages rise and descend while one or more aerialists move from within the sphere to without, standing on the top or hanging from the bars on the bottom.

The audience is comprised largely of devoted fans — rêveurs (French for “dreamers”) — who identify themselves by wearing red scarves.

The circus is presided over by a mysterious man in a grey suit, who lends the tale a menacing overtone.

But The Night Circus centres on two young magicians, Ceila and Marco, who are unknowingly pitted against each other in a dangerous competition from which only one person can survive. When they fall in love there’s an imminent sense of danger — and heartbreak. Can their deadly contest be called off before one of them dies?

Well, I’m not going to tell you the answer, am I? But rest assured this is a lovely, intensely imaginative read. I suspect that because of its romantic and magic realism elements it will appeal more to women than to men, and teenage girls are likely to adore it.

Not surprisingly the film rights have already been sold (by the same people who made Twilight), because the narrative is so visually strong. I have to say that I found its functional descriptions — all tell and not much show — a little wearing after a while. Ditto for the entire story being told in the present tense.

But as a light, fun read, with a smidgen of adventure, a touch of history, a little danger and loads of magic and mystery, this is the perfect book with which to be swept away. Red scarf optional.

11 thoughts on “‘The Night Circus’ by Erin Morgenstern”