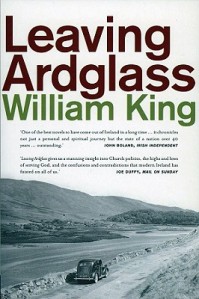 Sometimes you pick up a book and before you’ve even finished the first page you immediately know there’s something very special about it. That’s exactly how I felt when I began reading William King‘s Leaving Ardglass, a saga that spans 40 years and follows the lives of two Irish brothers.

What I didn’t know when I began reading the book was the way in which the fates of both MJ Galvin, a building constructor turned property magnate, and his younger sibling, Tom, would mirror the fate of Ireland itself.

Consumerism and the Celtic Tiger

Just as Ireland broke free of its Catholic stronghold, adopted consumerism and enjoyed the booming Celtic tiger years before cracks began appearing in the facade, the two Galvin brothers follow a similar trajectory. Although they come from opposite ends of the moral compass, as it were, both become successful in their chosen fields — construction and property development for MJ, the priesthood for Tom — and yet they also succumb to temptations in one form or another, leaving them bitter and downtrodden older men.

The story is narrated by Tom, a parish priest, looking back on his life. Much of the initial focus is on a “summer in London which had changed me”. He was one of thousands of Irish who went to “John Bull” (England) in search of a job at a time when there was little work at home. It’s 1961 and his older brother MJ is already running a successful construction business in north London, where he employs dozens of down-at-heel Irish workers.

It’s a tough, knockabout life. Workers are taken advantage of, subject to brutality, paid a pittance and put in dangerous life-or-death situations. What Tom witnesses that first summer challenges his value system and the ways in which he views his brother. But it also opens his eyes to the ways of the world — the joy of Saturday night dances in the Galtymore, the camaraderie of men in the pub (before the alcohol-fuelled brawls), gambling and women.

But most of all it adds to his sense of dislocation, as his sacristan sums up perfectly 40 years down the line:

‘We were neither fish nor flesh. Branded as letting down this ould country by going across to John Bull. Sure we’d have starved to death if we’d stayed.’ He flings another log on the pile. ‘And not wanted there because we were the drunken Irish.’

It is this dislocation, this feeling of never belonging and of realising that MJ’s behaviour, professionally and personally, is morally bankrupt that makes Tom reconsider his future. Instead of joining MJ’s firm, where he would effectively become second-in-charge and be set for life, he decides to enter the priesthood.

There are religious elements to the book — it may be useful to know that the author himself is a practising priest in Drumcondra, Ireland — but it does not shy away from the issues that have damaged the Church in recent times. Indeed, it raises many talking points — about celibacy, about the ways in which suspected pedophiles within the priesthood should be dealt with and about the role of the Church in the 21st century.

It’s also a fascinating account of life lived within the Church, of what one must do — and give up — to become a priest and how, even among those pious men, lives can be scarred by thwarted ambition, political rivalries and bitter in-fighting.

But what I particularly enjoyed was the portrait of north London — Cricklewood, Camden Town, Kilburn, the Holloway Road — during the 1960s that King paints. He has a special talent for bringing the building sites to life, of describing the back-breaking toil thousands of Irish emigrants undertook through necessity, not choice.

And the way in which he writes about the workers, queuing up each morning on Mornington Crescent, waiting to be selected as part of the construction crews to be trucked to individual sites, is especially vivid. You can practically smell the sense of desperation from the labourers and the little Hitler mentality of the bosses.

One or two, wearing creased shirts and loose ties, shout to get into the fucken trucks, that they have to go out to Leighton Buzzard. The men have a ruffled look: dried clay on their turned-down wellingtons or hobnailed boots. A thickset man is walking up and down inspecting a queue of men; he looks mostly at their shoes; every now and then, he lifts his cap and wipes his bald crown with a piece of navy cloth. […] Down the road, boys are jumping in the air and kicking around a paper football, jostling each other for possession.
‘Come on here,’ MJ shouts, ‘I’ll give you plenty to tire you out behind the mixer.’
They desert the ball like schoolboys and climb into one of the trucks. Above the thud of their boots, a big red-faced man with a head of black hair shouts abuse at them. Did they think they had all the fucken day? Such a crowd of lazy fuckers he’d never met in all his life.

And Tom, despite his flaws and his occasional lack of backbone (he never stands up to his elder brother, despite seeing some horrendous things), is hugely likable. I love that he spends his first few days in London trawling the bookshops on Charing Cross Road looking for “books that are banned at home: Room at the Top, Saturday Night and Sunday Morning, Catcher in the Rye“.

The story is shocking in places — there’s at least one death on a building site that hammers home the point that life was cheap — and there are endless examples of racism against the Irish (“Another Paddy. Filthy lot. I should never ‘ave taken them in,” Tom overhears a landlady say at one point). Mostly, there’s an all-pervasive sense of wasted lives, that these men will spend their lives “digging and drinking, and finish up at the doss-house”.

But the book does not make excuses for behaviours or decisions or the moral cowardice that lies at its heart. What it does, through evocative detail, a cleverly paced narrative and a lightness of touch, is showcase the human condition, with all its tensions and foibles and flaws. If anything Leaving Ardglass is about human greed — and how we can all be corrupted by it if we are not careful.

I loved this book so much it’s a genuine contender for my number one book of the year. And it’s encouraged me to source King’s previous novels — The Strangled Impulse (1997) and Swansong (2001) — both of which are out of print. Watch this space.