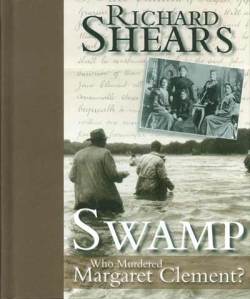 When I was a child growing up in Australia, the “Lady of the Swamp” was part of local folklore. She had mysteriously disappeared in 1954 and was rumoured to haunt the house in which she once resided. The house, known as Tullaree, was an Edwardian “mansion” surrounded by flooded swamp land, about 20km from where my family and I lived.

As a young kid, I knew little of the woman’s background, nor the circumstances surrounding her disappearance. And I only vaguely recall the discovery of a skeleton — believed to have been her body but never proved — buried in the dunes behind Venus Bay in the late 1970s.

But something about the tales I was told — that she was an eccentric recluse who had probably been murdered — stuck. I’ve always been intrigued by the possibility of a woman living in an isolated rundown mansion, surrounded by flood waters, going missing. How did she end up living there alone? Who was she? What was her story?

Cue my purchase of Swamp: Who Murdered Margaret Clement? earlier this year when I was visiting my parents in Australia. This large format hardcover, which features beautiful endpapers and sepia photographs, is a revised and enlarged edition of The Lady of the Swamp, first published in 1981. New Holland press have done a fabulous job with the design, because the book is a truly beautiful object. But I can’t be the first person to think that it’s kind of odd to give a true crime book this sort of treatment…

That said, this is a fascinating account of a real life murder mystery, with the emphasis on mystery.

What happened to the Lady of the Swamp?

No one will ever know what really happened to the “Lady of the Swamp”, although journalist Richard Shears hints at the most likely scenario. However, I’m not about to reveal it here, because that would be telling. But even without a “solution” — no one, for instance, has ever been charged with Margaret Clement’s murder if, indeed, she was murdered — this is a wonderful tale about one enigmatic woman’s life story and her unexplained disappearance.

What I didn’t know until I read this book was that Margaret Clement was once a beautiful, rich socialite — “the belle of Melbourne society” is how the author describes her — who was well-educated and well-travelled. Her father, a Scottish immigrant, had built himself up out of nothing to become one of Australia’s richest men. Upon his death, Margaret and her siblings inherited a fortune that would supposedly last them a lifetime. It didn’t.

Margaret and her elder sister, Jeannie, lived a rather cossetted life. In their 20s they set-up a mansion together — “Tullaree” in Tarwin Lower, about 150km south-east of Melbourne — where they farmed prized cattle with the help of their younger brother and domestic staff. They threw lavish parties for their friends visiting from Melbourne and served them caviar and smoked salmon.

When they weren’t socialising they were travelling the world — England, Scotland, Japan and China were just some of the places they visited. They would always bring back exotic furniture and tapestries and other household items for their much-admired home.

From riches to rags

The book traces how the sisters lost their fortune and ended up living as paupers in a crumbling mansion with not a penny to their name. It is unbearably sad in places. Both Margaret and Jeannie were well educated, had good manners and spoke in “cultured voices”, but they had no real life skills. They did not know how to run the farm and when their brother returned from the First World War he was too shell-shocked to help them.

Their naivety and their generosity was taken advantage of by a succession of domestic staff, scoundrels, thieves and gangsters. Even the lawyers and bankers got in on the act.

It was not until Margaret was quite elderly, living in squalor with just her cats and dog Dingo for company, that things took a turn for the better. She was a proud woman who had always refused all offers of help and friendship — indeed, she refused to ever leave Tullaree, even when the windows were smashed and the floorboards rotted through. But when new neighbours, Esme and Stan Livingstone, moved in, she let her guard down and became very close to them.

But were the Livingstone’s motives genuine? And what of Margaret’s nephew, a rogue with an eye on his inheritance — did he have his aunt’s best interests at heart?

A tale of greed and deceit

This true life story reads very much like a novel, and if I were to quibble with the author over anything, it would be this: he records some conversations that he could not possibly know happened and has a tendency to embellish scenes with extraneous — and unconfirmed — detail. It’s clear he has fictionalised some elements of the story, which is a shame, because it makes it harder to trust the “facts” as he reports them.

But regardless of this, I found Swamp: Who Murdered Margaret Clement? a deeply intriguing read about the exploitation of two well-to-do women, whose privileged and refined upbringing had blinded them to the wickedness of the world.

I came away from this tale of greed and deceit feeling that Margaret’s wilfulness, her stubbornness, her pride and her fierce independence, all qualities to be very much admired in a woman of that era, were ultimately her downfall. It is a sad tale and will linger in my memory for a long time to come…

Note that the print edition of this book does not seem to be available outside of Australia, but USA- and UK-based readers can buy a Kindle version from Amazon.

4 thoughts on “‘Swamp: Who Murdered Margaret Clement?’ by Richard Shears”