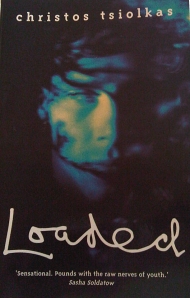 Loaded is the first novel by Australian writer Christos Tsiolkas, he of The Slap fame. To say the book is loud, brash and in-your-face would be an understatement. It brims with raw energy, power and verve. It’s audacious — and confronting.

It’s also pornographic and those who don’t really want to know the detail of casual, often anonymous, gay sex should probably stay clear. But the sex is central to the novel’s focus, for Ari, the narrator, is 19, unemployed and trying to find his way in the world. He is bored — and self-destructive. He’s looking for any kind of experience to lift him out of his ordinary, dull, suburban existence. And if that means getting it off with strangers in nightclubs and public toilets, then so be it.

Ari is also a drug user — and occasional pusher.

Yet despite the stark subject matter and the clear-eyed prose, there’s something sad and tender about this story.

Spanning just 24 hours, we get a glimpse of Ari’s frustrating home life — his father, a Greek immigrant, calls him an “animal” and is prone to angry outbursts; his mother, an Australian, shouts and nags — and see how he prowls the city — its streets, its suburbs, its nightclubs  — because he needs “something else going on”.

What’s clear from the outset is that Ari, aimless, directionless and confused by his sexuality, has a bleak world view shaped by the things he sees around him — his parent’s unhappiness (“I love my parents but I don’t think they have much guts. Always complaining about how hard life is and not having much money. And they do shit to change any of it”), the casual racism among his peers and the ways in which the immigrant community is just as obsessed by money and class as the “skips” (white Australians).

He is intelligent, good-looking (“I saw John Cusack interviewed on late-night television and he looked like me”) and obsessed by movies and music. In fact, he spends most of the novel mooching around listening to mix tapes on his Walkman (the music references are particularly good if you are of a certain, a-hem, vintage).

But what resonates most is Ari’s sense of alienation — from his parents (in particular, his father’s Greek background), his older brother (who is studying at university and is not afraid to stand up against his domineering parents), his friends (who have gainful employment) and himself (never quite sure if he is gay or straight).

This alienation is reflected in the city he sees around him — the narrative is very much tied to Melbourne’s suburban enclaves and is split into four parts named East, West, South and North — which he loves and loathes in equal measure. I particularly enjoyed his references to suburbs and places I know from my time living in Melbourne (which is about the same time that events in the book take place) and thought his descriptions of the Eastern suburbs (which are more affluent than the West) — with their “continuous loop of brick-veneer houses forming a visual mantra” — pretty much spot-on.

In the East, in the new world of suburbia there is no dialogue, no conversation, no places to go out: for there is no need, there is television.

The strength of the novel lies in Ari’s voice, which is angry, full of self-loathing and deeply cynical. He’s not necessarily a likable character, but he is empathetically drawn.

Loaded isn’t the type of novel you read for “pleasure”, but it’s worth reading because it offers an eye-opening peek inside a rarely seen world. It’s like getting on a rollercoaster for the first time: it’s deeply frightening but once the ride ends you’re glad you found the courage to experience it.

6 thoughts on “‘Loaded’ by Christos Tsiolkas”