A Room with a View was E.M. Forster’s third novel. It is set during the Edwardian era and is about a young woman trying to escape the social conventions of the time to lead the kind of life she wants to lead.

It opens in Florence, where Lucy Honeychurch is on vacation with her older cousin Charlotte Bartlett. (I have to say that the names in this novel are wonderful.)

Both women are disappointed that their rooms in the Pension Bertolini do not have views over the river. But when a fellow called Mr Emerson, who is staying at the hotel with his son George, offers to swap rooms, instead of thanking him for the kind offer, the women consider him impudent and ill-bred. (Those silly Edwardian manners, eh?)

This one act of generosity by Mr Emerson sets off a whole chain of events — including a murder — in which Lucy (and Charlotte) are ever-entwined with both the father and son, not only in Italy but back in England, too.

When the action shifts to Lucy’s childhood home — Windy Corner in Surrey, England — the reader must forgive one or two grating coincidences, because the Emersons move into a local cottage and suddenly there they are, just as they were in Florence, continually putting their foot in it and upsetting everyone’s sense of propriety. 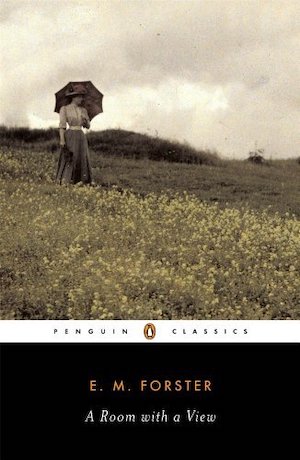 For most of the novel, Lucy struggles with working out what she wants from her rather cosseted life. Should she continue to travel and seek out adventure, or should she settle down and get married? When she finally accepts Cecil Vyse’s proposal of marriage (she refuses twice), her future looks mapped out for her. But it’s clear the match is not a good one.

Cecil, for a start, is probably the most pompous and snobbish character I have ever come across in a novel. (Honestly, he’s vile.) He’s described as “the sort who are all right so long as they keep to things — books, pictures — but kill when they come to people”. And his views on women suggest that he is going to have trouble keeping Lucy’s independent streak in check:

He daren’t let a woman decide. He’s the type who’s kept Europe back for a thousand years. Every moment of his life he’s forming you, telling you what’s charming or amusing or ladylike, telling you what a man thinks womanly; and you, you of all women, listen to his voice instead of to your own.

Lucy might not be educated but she has an enquiring mind broadened by travel — and she is set on being “a rebel who desired, not a wider dwelling-room, but equality beside the man she loved”.

By contrasting the repression of Edwardian society with the apparent freedom — and sunshine — of Italy, Forster gives Lucy a striking dilemma, because whichever path she chooses to follow will have negative consequences.

While A Room with a View is a kind of treatise about a woman’s right to be independent, it’s actually quite a light-hearted book filled with comic moments. Forster seems particularly scathing of tourists and there are some delicious references to the writing profession — ” ‘All modern books are bad,’ said Cecil, who was annoyed at her inattention, and vented his annoyance on literature. ‘Everyone writes for money these days.’ ”

As much as I appreciated the charm, wit and intelligence of this novel, I struggled to enjoy it.

I don’t think it helped that all the characters come across as frightful snobs (yes, I know that’s the point). Every time Cecil appeared on the page I just wanted to smack him (I’m not a violent person, honestly), and even Lucy, whom we’re supposed to cheer on, annoyed me because she failed to recognise that she was lucky to have the choice to either marry or travel — most women of that time would have had to succumb to the traditional route.

My views, however, are by the by — this book has been made into countless films, including an award-winning one by Merchant Ivory in 1985 which I’ve not seen. I suspect there are loads of you out there that absolutely love it, but for me, it was a lukewarm read…

‘A Room with a View’, by E.M. Forster, first published in 1908, is listed in Peter Boxall’s 1001 Books You Must Read Before You Die, where it describes the novel as a “brilliant satire of early twentieth-century middle England and its rigorously upheld social conventions”.