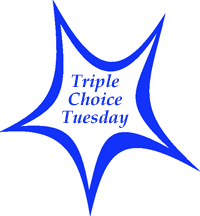 Welcome Welcome to Triple Choice Tuesday. This is where I ask some of my favourite bloggers, writers and readers to share the names of three books that mean a lot to them. The idea is that it might raise the profile of certain books and introduce you to new titles, new authors and new bloggers.

Today’s guest is Shelleyrae from Book’d Out.

Shelleyrae lives in rural Australia. She is a stay-at-home mother of four, aged six to 15, but she also does some freelance graphic design and teaches part time.

She reads mainly genre fiction from a fairly eclectic range. This year she is focusing on lots of women writers as part of her participation in the Australian Women Writers Challenge for 2012. And to say she is a voracious reader is putting it lightly — in late March she had read 65 books this year already! 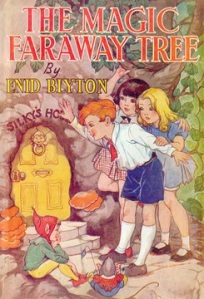 It is a delight to see my youngest daughter devouring Enid Blyton, particularly The Magic Faraway Tree and Wishing Chair series, in the same way I did as a child. When I handed her my precious 30-plus-year-old copy I thought it might be too old fashioned for her, but it seemed to capture her imagination and so I bought her the more recently released omnibus paperbacks. She read all 676 pages of The Magic Faraway Tree Omnibus in just under a month and is part way through The Wishing Tree Collection; she now also has the audio (read by Kate Winslet) which she listens to each night.

I have such find memories of the stories and as I grew up, I also enjoyed Enid Blyton’s Famous Five, Secret Seven, Mallory Towers and St Clares series. Sadly, I have only a handful of them left on my shelf. 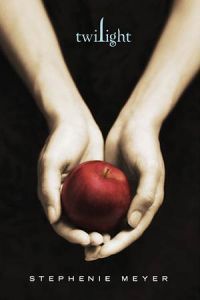 A book that changed your world: Twilight by Stephenie Meyer

If you are done rolling your eyes, I’ll tell you why I am choosing Twilight. I have always been a voracious reader, but it has been a very solitary passion.

Most of my friends and family read perhaps a half a dozen books a year, while I have read well over 200 books a year since I was a teenager. When I casually Googled for some information about the Twilight series for my teenage daughter, which I had bought for her in a vain attempt to get her to read, I was astonished to stumble upon the book blogging community. I spent the next few hours hopping from one blog to another, delighted to discover people as obsessed as I was with reading and talking about books, scribbling down titles and authors to look up at the library.

It took me more than a year to build up the confidence to launch Book’d Out and the blog has changed my life. Not only can I now share my obsession with people who are actually interested, I have access to a much wider range of books, chat to authors, work with publishers and next year I plan to go back to school and get a second degree in Librarian Studies.

Oh, and my daughter never did read Twilight. I did though, and yes, I loved it!

A book that deserves a wider audience: The Build Up by Phillip Gwynne

I doubt anyone has even heard of this author outside of Australia, though he has won several awards for his young adult novels Deadly Unna? and The Swerve. I discovered this gem, published in 2008, at my local library. It is Gwynne’s first, and to date, only adult novel.

In Darwin, Australia’s Top End, the discovery of a body in a billabong might finally allow Detective ‘Dusty’ Buchanan to close her biggest case and put their main suspect behind bars. As the weather builds, another body is found, and then lost. Dusty is feeling the pressure from all sides. Which will break first — the case, the woman or the weather?

The plot is interesting, as are the characters, but what is truly commendable is Gwynne’s ability to evoke the mystique, the brutality, the vibrancy and isolation of the Top End. You can feel the atmospheric pressure of the Build Up (the period just before the tropical monsoon weather hits), as well as the pressure that Dusty is rebelling against. There are some wonderful descriptions and the writing style is both spare and yet evocative. The tone is distinctly Australian with references and slang that might be hard to translate for readers from elsewhere. It’s rare to find that genuine Australian flavour, too often novels — particularly in this genre — set in Australia don’t exploit the uniqueness of our country in favour of generic commercial appeal. Gwynne hasn’t compromised and it gives The Build Up impressive appeal.

Thanks, Shelleyrae, for taking part in my Triple Choice Tuesday!

At last! Someone names Enid Blyton in their favourite book slot. I grew up reading battered old hardcover editions of The Famous Five and the Secret Seven, which I inherited from my mother, but my favourite Enid Blyton book — aside from the Noddy series, which I adored — was The Children of Cherry Tree Farm, which I must have read a dozen times as a young girl.

I’m yet to embrace the Twilight series, although I’m tempted, and I like the sound of The Build Up. I don’t think I’ve ever read a book set in Darwin before…?

What do you think of Shelleyrae’s choices? Have you read any of these books?