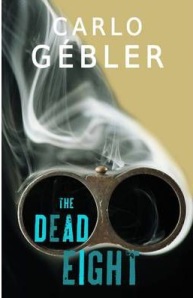 Don’t be fooled by the menacing image on the cover of this book: this is not hardboiled noir, as I had mistakenly thought, but historical fiction of the finest order. The title of the novel, and the picture used to illustrate it, comes from what criminals call the two circles of the end of a shotgun lying on their side.

Carlo Gébler’s The Dead Eight is based on a true story in which police framed an innocent man for the murder of a prostitute in rural Ireland in 1940. The man, Harry Gleeson, was a farmer and he was hanged at Mountjoy Prison the following year. His story has been recounted in Marcus Bourke’s 1993 non-fiction book Murder at Marhill: Was Harry Gleeson Innocent?

Gébler’s dramatic retelling of invents is less about Gleeson and more about the murder victim, Moll McCarthy, who was found lying in a field with two fatal shotgun wounds — in fact, one side of her face had been blown away.

The author is careful to state in his Afterword that his fictionalised version is a mix of “factual content with a great body of invented speculative material”. He has used key dates and events, the topography, some lines from police interviews and court cases but everything else comes entirely from his imagination.

And what an imagination it is. Moll “Foxy” McCarthy is a wonderfully realised character: a woman from the wrong side of the tracks, desperate to be loved and wanted, who finds the only way she can survive is to charge men for sexual favours. Her “fee” is not necessarily money, but anything to keep her tribe of illegitimate children — she had seven by seven different men — clothed and fed.

He drove away. She carried the potatoes inside. As a rule when one of her callers gave her a gift she was happy — above all if it was food because that meant a feed for the children and that was great. She always got a good feeling when she filled their bellies and there was only one feeling she knew to beat it and that was the feeling she had gotten when her visitors had told her that they liked or even loved her and they would leave their wives and families and marry her and even though none ever had and even though she knew deep down that they would not do what they said she had always believed them at the moment they had said these things and then she was happy and trusting and certain until they broke the terrible news that the relationship was over and they said that they were not going to marry her, let alone see her again.

The story is told from the viewpoint of Moll McCarthy’s grandson, Hector, who wants to “tell the whole truth”. “Still, even if this were a novel, would you believe it?” he writes.

The narrative takes a long time to build up, because it starts with the life of Moll’s mother — also a prostitute — before the focus shifts to Moll. And Gébler’s prose, while understated and journalistic, is rich in detail. He is particularly good at capturing the period detail and the social mores of the time. (I should point out that commas are not his strong point — this lends the prose a kind of breathy, almost emphysemic, quality, as the section quoted above clearly illustrates.)

But there is a purpose to this careful and painstaking analysis of two women (and the men entangled in their lives), because it enables the author to draw a warm and empathetic portrait of those many might judge — and condemn — rather more harshly. And it shows that no matter how people choose to live their lives no one deserves to meet their end in such a brutal and untimely manner.

Gébler’s greatest achievement is showing the way in which Moll was being manipulated by the people around her —  she had become an unwitting pawn in a dangerous game involving the IRA and the police — but he does so with effortless restraint. Indeed, this expertly paced book is not so much an examination of a crime, but a fascinating look at Irish social history at a time when no one quite knew who to trust.

An extraordinary novel about a miscarriage of justice

I read this novel with a slow-simmering anger: anger at the way Moll, as a woman, never had a chance to make something of herself; anger that she paid the ultimate price for this; anger that the authorities got away with murder; and anger that an innocent man was hanged for something he didn’t do.

The Dead Eight is an extraordinary novel in all senses of the word. In his attempt to expose a miscarriage of justice in the Irish judicial system and explain how it came about, including the motives by all those involved, Gébler has crafted a genuinely moving, humane and important novel.

2 thoughts on “‘The Dead Eight’ by Carlo Gébler”