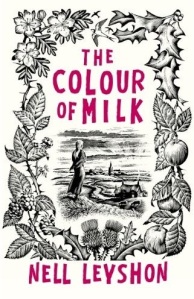 The very best novels are always the ones that tell a story in a truly distinctive voice — Nell Leyshon’s The Colour of Milk does just that.

Beginning in “this year of lord eighteen hundred and thirty”, it is narrated by the ever-feisty and sharp-tongued Mary, who is 15 years old and has an extraordinary tale to tell.

Mary, who has a crippled leg — “mother says it was like that when i come out into the world” — lives on a farm in the West Country with her parents, her beloved grandfather and three sisters. One day her father tells her that she is to move to the local vicarage, where she will work for Mr Graham, whose wife is unwell, as a live-in help. The prospect is shocking, because she’s never been further than the top field of their property, and nor has she slept in any bed other than the one she shares with her sister.

She goes to the vicarage relunctantly. As much as she hates her father and the way he treats her, she misses her family and her usual routine desparately. But there is one good thing about working at the vicarage: Mr Graham has promised to teach her to read and write. And that is how we get to read Mary’s first-hand account of her new life.

The most striking thing about The Colour of Milk is the prose style. There is not one capital letter in the entire narrative, but the sentences, so heart-felt and direct, are easy to follow.

this is my book and i am writing it by my own hand.
in this year of the lord eighteen hundred and thirty one i am still sitting by my window. the wind comes through the cracks in the window frame.
i am tired from doing this and my wrist aches from doing this. but i promised myself i would write the truth and the things that happened. i will do that.
and my hair is the colour of milk.

The narrative, which is very much tied to the seasons, is divided into four parts — spring, summer, autumn, winter — so that we experience the full cycle of rural life in the early 19th century. During the year we see Mary transform from a naive farm girl into a semi-literate woman, but along the way she gets to experience far more than she bargained for when Mr Graham wants to teach her more than her letters…

The Colour of Milk is a truly compelling book because Mary’s voice is so urgent and authentic. And the ending, which is shocking, unexpected and heart-breaking, is the kind that makes you gasp out loud — and then you want to have a big sob. The story is so imprinted on my mind it has stayed with me for more than two months now (I read it on the plane to Canada back in April) and is by far the best (and most memorable) thing I have read so far this year.

It’s the type of novel I want to press into everyone’s hands and say, here, read this. If that’s not an endorsement for a fine little novel (it comes in a very compact size), I don’t know what is.

11 thoughts on “‘The Colour of Milk’ by Nell Leyshon”