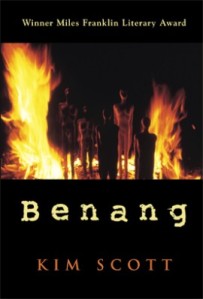 Kim Scott‘s Benang: From the Heart is a story about Australia’s history of white subjugation of indigenous people. I had every good intention to read it for Anz LitLovers’ Indigenous Literature Week in early July. But when I started it I soon realised this was not a book to rush through. Indeed, I found it so upsetting in places I had to put it away for a bit, so that I could chew things over until I could summon the courage to pick it up again.

This deeply poignant and haunting story is narrated by Harvey, who describes himself as “the first-born-successfully-white-man-in-the-family-line”. From the age of seven he goes to live with his grandfather, who runs a boarding house mainly inhabited by alcoholic men. It is here that he is “raised to carry on one heritage, and ignore another” but as a teenager he begins to “reconsider who I am”.

In that search for self, Harvey comes to slowly understand his place in the family line — “the product of a long and considered process” to create a white man from a long line of people with aboriginal blood. This process has been overseen by his grandfather as part of a bold — and disturbing — scientific experiment in which he has been trying to “breed out” the aboriginal blood in successive generations in order to achieve “biological and social absorption”, to “dilute the strain” and to “uplift a despised race”.

His efforts mirror those of the settlements and missions in the early part of the 20th century in which Australia operated a crude system of apartheid designed to separate whites from blacks.

A blending of fact and fiction

The narrative is littered with real-life archival documents, many of them from the Chief Protector of Aborigines, A.O. Neville, who presided over a misguided — and cruel — policy of cultural assimilation, culminating in the removal of aboriginal children from their families to be raised as “white”. This factual content — which stands on its own and is not editorialised or commented upon — serves to make the fictional storyline more compelling and heart rending.

Scott, who is of aboriginal ancestory himself, refrains from casting judgement, but it would be the coldest of readers who did not understand the deep pain, sadness — and sheer immorality — of the story presented here.

According to an article by Susan Midalia, the author wanted Benang to be “educative in both historical and emotional terms — to inform us about the shameful history of the white treatment of Aboriginal people and
also, and centrally, to ‘speak from the heart’.” On those levels, he wholly succeeds.

He also succeeds in crafting a compelling and memorable tale. The prose is  succinct and journalistic when it needs to be, at other times it is lyrical and poetic — at all times there is never a word out of place.

Occasionally, the narrative, which loops around in non-chronological order, borders on repetitive, but I suspect this is a deliberate attempt on Scott’s behalf to show how history repeats and the lessons of the past are not learned. There are also forays into what could be best described as “magic realism” — Harvey has the ability to hover or fly — but perhaps this is merely a metaphor for “aboriginal dreaming”?

It was a white bird with bright red at its beak. […] Flying low at the edge of the rock, its wing beats regular and powerful, it arrowed straight to where the younger bird was hovering, and then arced up to join it.

I looked to my children, and  — oh, this was sudden, not at all a gradual or patient uplift — I was the one poised, balanced, hovering on shifting currents and — looking down upon my family approaching from across the vast distances my vision could cover — I was the one to show them where and who we are. […]

I told Uncle Jack and the others of what had happened, and as I was speaking I found myself suddenly aware of how they listened. How they looked at me so closely, so attentive as I spoke. “Those birds. That was the spirit in the land talking to you. Birds, animals, anything can do it. That is what aboriginal people see.”

I came away from this book feeling a mixture of joy and sorrow, anger and regret. It challenged me on many levels and I’m so grateful for having snapped the book up when I found it in a second-hand store last year.

Kim Scott‘s Benang was joint winner of the Miles Franklin Literary Award in 1999, an honour it shared with Thea Astley’s The Drylands.

For another view on this book, please see Lisa Hill’s thoughts.

8 thoughts on “‘Benang: From the Heart’ by Kim Scott”