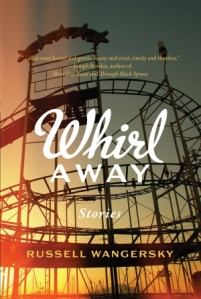 At the risk of sounding like a stuck record, I always find it difficult to review a short story collection. Should I tackle each story in turn, or give my overall impression of the entire book? In the case of Russell Wangersky’s Giller shortlisted Whirl Away, I’m going to go for the latter option, but will single out the stories that I particularly enjoyed and that have stayed with me since finishing the collection more than a week ago.

A handful of standouts

There are 12 stories here, each of which is around 20 pages in length. While I enjoyed each one, there were a handful in particular that stood out, including: Family Law, about a down-to-earth divorce lawyer, who is having marriage problems of his own; and Look Away, about a lighthouse keeper who loathes his wife’s sloppy habits and one day cracks under the pressure.

But my two favourites, and the ones I’m still thinking about, are about a five-year-old boy (Echo) and a married man obsessed by car accidents (Sharp Corner). (To be honest, there are quite a few stories in this collection about road accidents and ambulances, perhaps a product of Wangersky’s newspaper background?)

In Echo, a perfect jewel of a story, Kevin Rowe is a five-year-old boy playing on the front deck of the white single-storey, vinyl-clad house he shares with his parents. As he plays in the sun, he talks to himself, making odd statements, such as, “There you go again. How many times do I have to listen to this stuff?” And: “Save it for someone who cares. Save it for someone who cares.” He is clearly imitating his father, a truck driver, who works long shifts.

Then there was the sharp sound of glass breaking inside the house, and from the front windows, loud voices that got louder every time the wind from the back of the house puffed the curtains out against the window screens. Now and then, Kevin could hear snatches of words, sometimes his mother, her voice low and hard and biting off every word, his father’s a steady grumble that sometimes erupted into single words like “job” and “paid”. Once, a sound like someone smacking their hand flat down on the smooth surface of the countertop. Then, crying that sounded far away to Kevin, like he was hearing it through a cardboard tube from a roll of paper towels. The sounds kept rolling from the house, like waves slapping in on the shore.

Kevin ends up falling asleep in the sun, and when he wakes up he is greeted by the sight of a police car parked on the road, “the lights on its roof flashing and throwing the shadows of the fence palings across him and all around the front of the house”. He sees a policeman, hand on top of the gun in his holster, enter the house. A little later an ambulance arrives and Kevin is taken away.

The magic of the story is that you don’t know the specifics of what happened — although you can guess it was a domestic and someone, most likely Kevin’s mum (rather than his father), has been seriously hurt. You wonder what will happen to Kevin? But then there’s another part of you that wonders whether the whole encounter might have been just a dream in Kevin’s head?

A story about a curious obsession

In Sharp Corner, we meet John and Mary Eckers, whose house is on a tight bend that fast-travelling vehicles often fail to take. The result? Fatal car accidents in their front garden.

Instead of trying to solve the problem, John gets more and more obsessed, in a ghoulish kind of way, and finds the whole experience exhilarating to the point that it makes him feel truly alive. He maintains his excitement about “people regularly dying at the end of your driveway” by turning these terrible accidents into intriguing dinner party conversation.

He was always amazed by the way strangers would circle around him as the stories got more detailed. It brought a sudden importance to the room, an obvious and almost respectful hush. John learned as he went along that it was better if he didn’t tell the whole story in one go, but instead kept things back, parcelling details out piece by piece, always making the careful effort to keep his face earnest, sincere, almost shaken.

What John fails to recognise is that his obsessional behaviour repels and disgusts Mary. And that’s what makes this story an exceptional one: on the surface Sharp Corner is about a man seeking attention in a cruel and unusual way, but underneath it’s a portrait of a marriage and the ways in which couples constantly misinterpret one another.

Each story in Whirl Away is an ideal bite-sized read, perfect if you want something to devour in your lunch hour or during a short journey by public transport. But because I was reading this to a deadline, I read it cover to cover in three different sittings. That meant I often didn’t have time to mull over each separate story, and in the end, things began to blur into one another.

It doesn’t help that Wangersky adopts a similar tone and prose style in each story, so there’s only the subject matter to differentiate them. When he writes in the first person, all the characters sound the same.

But he is much better in the third person. And he’s a master at catching the reader’s attention, either by throwing a curve ball in the form of something completely unexpected — usually towards the end of the
story — or by making his characters, many of whom are curiously self-deluded, behave in such a way that they continue to live on in your head long after you’ve reached the conclusion...

9 thoughts on “‘Whirl Away’ by Russell Wangersky”