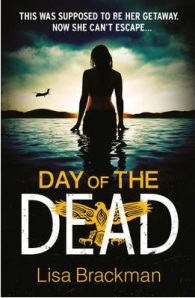 I’m not sure what made me keep this book when it arrived unsolicited months and months ago, but it survived two or three book culls and I took it away with me on holiday thinking it would make the perfect read for a wintry day. I was right. Lisa Brackman’s Day of the Dead — published in the US under the title Getaway — is nothing special in terms of psychological thrillers, but it’s fast-paced and (slightly) more intelligent than your average “airport novel”.

The holiday from hell

The story is not a particularly original one — woman alone on holiday has one-night stand with dangerous man and then gets herself into all kinds of bother — but who cares when you are looking for some instant gratification of the easy reading variety?

In Day of the Dead, the main protagonist is Michelle Mason, a feisty if somewhat naive young widow from Los Angeles. On holiday in Puerto Vallarta, Mexico, she is trying to come to terms with the loss of her husband and the subsequent loss of all their assets — it turns out rich hubby got caught up in the global financial crisis but didn’t let his wife know. He continued to fund their luxurious lifestyle — which he couldn’t afford — and now Michelle has been lumbered with all his debts.

But that turns out to be the least of her concerns, because when she meets Daniel, a handsome expat American (aren’t they always handsome in these kinds of novels?), and takes him back to her hotel room, she unwittingly gets caught up in events that are beyond her control. By page 16, it’s clear that the dream holiday is about to turn into a nightmare.

It’s a bit tricky to explain much else without spoiling the plot. But essentially Michelle is trapped in Vellarto, thanks to a missing passport and lack of cash, and doesn’t know whom she can trust. Even the police are suspect.

When a shady man called Gary asks her to spy on Daniel in exchange for her personal debts being paid off, Michelle baulks at the idea — but then she realises she has no alternative: Gary will kill her if she refuses to play his “game”.

Once Michelle agrees to this Faustian pact, the narrative goes through all kinds of twists and turns, so that you’re never sure what is around the corner for our poor heroine caught in the dangerous world of drug runners and corrupt police officers. While the ride is wild, to Brackman’s credit, the plot developments and the life-or-death situations in which Michelle finds herself don’t feel too far-fetched. Even the characters, of which there’s a small but defined cast, seem considerably fleshed out for a novel of this type. And despite the simple prose style, it’s very visual — it would make a terrific Hollywood blockbuster.

Day of the Dead won the Grand Prize for general fiction at the Los Angeles Book Festival in March 2012. It may not be highbrow literature, but it’s entertaining, smart and fast. The point is to just go with the flow and enjoy the journey.

6 thoughts on “‘The Day of the Dead’ by Lisa Brackman”