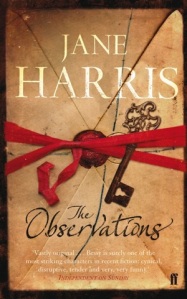 If I was to name a “literary discovery” I made during 2012 it would be British author Jane Harris. I read Gillespie and I back in March and loved it so much it made my top 10 list of books for the year. Her debut novel, The Observations, would have been on that list, too, but I had to narrow down my choices and limiting one book per author seemed a quick and easy way to do that. But there’s not much between these novels — both are delightfully fun reads.

A quirky take on historical fiction

The Observations is set in rural Scotland in 1863 and is narrated by one of the most engaging characters you are ever likely to meet in contemporary literature. Her name is Bessy Buckley — although she has changed it from something else in order to escape her past — and she’s Irish, but has been living in Scotland for four years. (How she came to Scotland and what she has been doing since her arrival are revealed only when Bessy feels comfortable enough to tell you — and that’s a good way into the novel.)

When we first meet Bessy, she is on her way from Glasgow to Edinburgh, where she hopes to find a “new situation” — her last employer, Mr Levy, has died. But she gets diverted enroute and finds herself on a farm known as Castle Haivers, where she meets an intriguing and very beautiful mistress, Arabella Reid, who employs her as an “in and out” girl looking after the house and garden.

But Arabella has strange ways — she also wants Bessy, who can read and write, to keep a journal as a condition of her employment. It is this keeping of the journal that makes The Observations such a quirky take on the traditional maid-and-mistress scenario — through it we learn so much, not only of Bessy’s current life and thought processes, but of Arabella’s weird fascination with the underclass.

An intimate and bawdy voice

The most striking thing about this chunky novel is Bessy’s voice. It’s intimate, bawdy and very honest. She has a wicked sense of humour — for instance, she introduces the stuck-up Reverend Pollock as “Reverend Bollock”, and at a posh dinner party hosted by Arabella she sings a self-composed song “about a man who is afflicted by a severe case of intestinal gas and who is prone to fart in inappropriate places” (hilariously entitled The Wind that Blows down Barrack Street).

She also has a rather mischievous streak that sadly backfires on her in a most alarming way — and it is this turn of events that packs quite a powerful punch. Indeed, for a book that is seemingly a simple tale of a young maid trying to please her employer it is filled with delicious twists and turns that keeps the reader on their toes: you are never quite sure what is going to happen next.

There’s an intriguing undercurrent of menace that runs underneath the storyline (think Daphne du Maurier’s Rebecca), but The Observations is mostly a comic tale. Yet Harris balances the humour with moments of poignancy. (Bessy’s back story is particularly tragic — even if she doesn’t realise it — but the sympathy card is never played, which makes it even more sad.)

My only criticism is that the ending is a bit “twee” — all the loose ends are too deftly and neatly tied up — but I can’t stress how much I enjoyed being in Bessy’s lively and entertaining company for the 10 or so days I took to read this. I really can’t wait to see what Harris delivers next.

19 thoughts on “‘The Observations’ by Jane Harris”