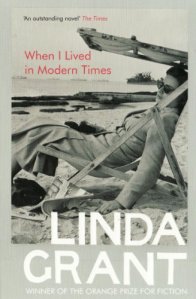 A young woman’s search for cultural identity at the end of the Second World War is the focus of Linda Grant’s award-winning When I Lived in Modern Times. The story is set largely in Palestine before partition and is told through the eyes of a 20-year-old Londoner in search of her Jewish roots.

Evelyn Sert is English by birth, but her parents are Jewish immigrants from Poland and Latvia. All through her childhood, she is conscious of the fact that she is “exotic” — “I was a round-faced, stubborn, dark-haired girl whose lips were too red and whose eyes were too black” — and struggles to fit in.

After a failed attempt to join art school, she works at her mother’s hairdressing salon in Soho until her mother’s untimely death in 1946. Then, itching to start a new life and keen to discover her Jewish roots, she moves to Palestine, where she finds it equally hard to fit in.

Living on a Kibbutz, where she washes floors, disinfects urinals and works long hours, doesn’t suit her — until she (belatedly) discovers boys and sex. But then she moves to Tel Aviv, a brash modern city, and reinvents herself entirely, with a new name, new apartment and new job — as a hairdresser in a salon with a largely British clientele.

Through her work, she falls in with a crowd of women married to British policemen. She feels comfortable in their company because I “could be an Englishwoman”.

I understood how to behave with them. If they offered you a sandwich, I knew that it was customary to refuse the first time and then accept only when pressed, while amongst the Jews of Palestine, if you said no, you went hungry. It was relaxing never to have to wonder as I did when I was amongst my own kind, ‘What is going on? Why do they do things this way? Why do I, who am one of these people, not know how to be a Jew in a Jewish land?’

But the longer she stays in Tel Aviv, the more she adjusts to the Jewish ways and customs, and begins to comprehend the Jewish struggle for The Promised Land. When she falls in love with a handsome Jewish boy, she gets caught up in events much bigger than herself — and the story suddenly develops an unexpected thriller-ish aspect that had me furiously turning the pages.

Caught between her new life and her old one, Evelyn’s story is as much about her coming-of-age than anything else. But dig deeper, and her story also mirrors the struggle of a new Jewish state trying to find its feet.

But I had come to the place where there was, mercifully, no past and in
which it was the duty and destiny of everyone to make the future, each
for himself and for his country.

I found Evelyn’s sense of displacement — never feeling English enough, not quite understanding the Jews — the most powerful aspect of the novel. But Evelyn’s experience is not unique: at the time Palestine was one of those places — flooded with refugees and displaced persons from the Second World War — “where everyone came from somewhere else and everyone had a story to tell and these stories were not always inspiring or lovely”. (For an Australian take on this experience, I highly recommend Alan Collin’s trilogy, A Promised Land?)

Her constant questioning of herself (she has a rich inner world) is only blinded when she falls in love, so that the person she should have been questioning most gets a free ride, the consequences of which are nefarious — and deadly.

And while the novel touches on issues of anti-semitism, the politics of displacement, the Holocaust and the silent, often bloody, struggle for a Jewish homeland, it’s not all darkness and fear. The heat and dust and brilliant sunshine of Palestine is almost a character in its own right. And the middle-class, largely British, clientele in the hairdressing salon offers much light relief — some of their conversations are hilarious.

When I Lived in Modern Times is one of those novels that initially feels simple — in tone, style and storyline — but the further you progress, the more you realise the author is dealing with complicated, occasionally controversial, and weighty subjects.

The narrator’s engaging, if occasionally self-centred, voice is key to the novel’s success — it is only when Evelyn’s eyes are truly opened to the world around her, and the way in which she has been used, that the full emotional force of the narrative hits you. It’s a splendid, entertaining and powerful read.

Note: at 99p on Kindle, this book was an absolute bargain — but for some weird reason the entire text was in italics, not the easiest of fonts to read.