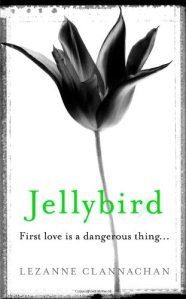 It’s no secret that I like a good psychological thriller. I especially like stories that are fast-paced, the kind that make you want to stay up all night reading, and even better if there are plenty of plot twists and loads of secrets to unveil, so you’re never quite sure what the ending might hold in store. Throw in a feisty lead character, a liberal sprinkling of paranoia and menace, and I’m pretty much sold. I’m pleased to say that Jellybird, the debut novel by Lezanne Clannachan, ticks all these boxes.

The story (which is told in the third person) revolves around Jessica, an up-and-coming jewelry designer, who has been married to Jacques, an ex-pat American, for five years. But  despite their obvious happiness together, Jessica has a slightly tortured past — her father deserted the family when she was a young girl and her anxious mother never quite recovered from the betrayal. This manifests itself in Jessica through nervous energy, a propensity to self harm, and lack of self confidence.

So when a flamboyant client, Elizabeth (‘Libby’) Hargreaves, strikes up a friendship, Jessica is delighted by the attention even if she is puzzled by Jacques’ obvious distaste for her. “Why would you want to be a friend with a woman like that?” he asks.

Of course, Jacques’ opinion is swept under the carpet — even when it starts to become clear to Jessica that Libby’s friendship is taking on a slightly stalkerish dimension (think Single White Female). As the narrative unfurls, this cloying sense of claustrophobia heightens to almost unbearable proportions. But to what end is Libby developing this almost unhealthy interest in Jessica? And what does it mean when Jessica finds her talking to Jacques, their heads together in what appears to be some kind of collusion?

This rather menacing narrative thread is only one half of the story. The other half, which is told in alternate chapters, explores Jessica’s back story — what it was like growing up in a caravan park, run by her mother, in a seaside town, and the secret friendship she struck up with a local teenage boy, Thomas, also known as the ‘ghost boy’, who later disappeared in mysterious circumstances.

These two threads are drawn together when Libby’s “friendship” so upsets Jessica that she makes the seemingly unwise decision to track Thomas down. Along the way, Jessica must confront some horrible home truths, including a brutal murder, a dodgy policeman and a troubled relationship with her mother.

This might sound rather far-fetched, but Clannachan writes with an assured hand, so there was never a time when I thought, this is getting ridiculous now. (That said, there were a couple of false notes that I wasn’t too sure about, including the policeman mentioned above, and an unreported sexual attack). Her exploration of sibling rivalries, marital tension and mother-daughter relationships is deftly and intelligently handled.

But it is Jessica’s downward spiral into a kind of manic frenzy of paranoia which makes the narrative work, because you’re anxious to see how events are going to play out — has she completely lost her marbles or is there a very real reason for her fear and anxiety?

Jellybird is an exciting read and all the loose ends are tied up neatly at the end, even though I wasn’t quite convinced by some of the explanations. It reminded me very much of Nicci French’s work and Anna Raverat’s chilling debut Signs of Life. It’s dark and unsettling, but it never sways from its course: a dramatic, often nail-biting, story told in a clear, heartfelt voice.