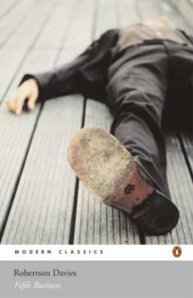 First published in 1970, Robertson Davies’ Fifth Business is a Canadian literature classic and listed in Peter Boxall’s 1001 Books You Must Read Before You Die. It is the first volume of the Deptford Trilogy, but can be read as a standalone novel. The title refers to the idea of a person being neither hero or heroine, confidante nor villain, but still being a vital part of a plot — without them the denouement or resolution would not happen. And that is the perfect description of the role with which our narrator, Dunstan “Dunny” Ramsay, fulfills — he is the “fifth business”.

The novel opens by recounting a rather compelling and ultimately seminal moment in Dunny’s life:  It is “5:58 o’clock p.m. on 27 December 1908” and he is “ten years and seven months old”. He is returning from a sledding adventure with his friend (and occasional enemy) Percy Boyd Staunton and snowballs are being thrown. Hidden in one of the snowballs is a stone.

Percy throws this dangerous snowball at Dunny, who ducks to avoid it, and it hits a woman, walking nearby, on the back of the head. She cries out and then collapses to the ground. Her name is Mrs Mary Dempster and she is out taking a stroll with her husband, the local Baptist minister. They do not see who threw the snowball — no accusations or confessions are made — but Dunny is plagued by guilt because of two shocking outcomes: Mrs Dempster is pregnant and the fall results in her baby being born prematurely; she also spends the rest of her life as a “simpleton”.

From this one incident, Dunny finds himself forever tied to three people: Percy, who threw the stone; Mrs Dempster, who he helped carry home on his sled; and Paul, the premature baby, who grows up to become one of the world’s leading illusionists.

From this exciting start, the book suddenly expands into a wider view as we learn that Dunny is now in his early 70s and has recently retired as a teacher. In fact, what we are reading is a report to a headmaster in response to an “idiotic piece that appeared in the College Chronicle in the issue of midsummer 1969″. It seems Dunny did not appreciate the portrait of himself and wishes to correct the impression that he is “a typical old schoolmaster doddering into retirement with tears in his eyes and a drop hanging from his nose”.

But what most galls me is the patronizing, dismissive tone of the piece,
as if I had never had a life outside the classroom, had never risen to the
full stature of a man, had never rejoiced or sorrowed or known love or
hate…

The rest of the novel fills in the gaps by telling the story of Dunny’s life. And he is right — if you can forgive the slight snobbery in his voice and his often hard-hearted tone (he feels no emotion on the death of his parents, for instance) — Dunny has done much more and experienced much more than the drab biography of him in the newspaper might suggest. Not only has he devoted 45 years of his life to teaching boys in a private school in Toronto and become a decorated war hero (the latter a point of embarrassment rather than pride), he has developed an interesting sideline as a hagiologist (a specialist in saints) and sold 10 books on the subject, some of them to extraordinary best-selling success.

He has travelled the world, not only as a soldier in the Great War — in which he was “frightened for three years”, mistakenly thought dead on the battlefield and awarded the VC “posthumously” — but in pursuit of knowledge about the saints he finds so fascinating.

Along the way he has fallen in love with various women — his affairs are recounted in the narrative — but has never been able to commit to any one in particular, except perhaps Mrs Dempster, who he comes to believe is a religious saint after he sees her face on a Madonna in a church he seeks refuge in during the height of the war.

And he has kept in contact with Percy, almost his polar opposite, who becomes a very rich man focused on material gain, and constantly runs into Paul, who reinvents himself under another name to become a magician renowned around the world.

I have to be honest and say I thought The Fifth Business a rather hit-and-miss affair, which may partly explain why it has taken me so long to pen this review (I finished the book in late January). I think there are two factors at play here.

First, because the narrative is essentially composed of a series of set pieces and “chapters” in Dunny’s life, the interest level (or entertainment value, for want of a better description) was not consistent throughout.  I enjoyed the early parts of Dunny’s life and I loved his experiences during the Great War and in the immediate aftermath, but for me other parts waned and when I put the book down I struggled to pick it back up again.

And second, I found the way in which all the women were depicted as problematic — and chauvinistic. I realise that is probably a reflection of the time in which the book was set (and written), but Dunny’s treatment of all the women who come into his life is so reprehensible (or alien) that I did not find him particularly empathetic. He cannot understand his mother (and feels nothing upon her death), he puts Mrs Dempster on a pedestal, and he treats the nurse who falls in love with him during the war very badly indeed. The girl waiting for him at home is portrayed as empty-headed and husband-hungry, and another woman he meets in later life comes across as a vicious manipulator. They are all desperate and needy.

That said, I loved the eyewitness view of history presented here and being able to follow the way in which people’s lives play out — Percy’s rise to riches and Dunny’s complicated friendship with him is one of the novel’s highlights. Similarly, Davies’ portrayal of small town Canadian life, where alliances are forged depending on which church you attend, and how communities can band together (or pull apart) at times of need, is deftly portrayed. And its exploration of moral responsibility, the ties that bind us to people and places, and our diametrically opposed hunger for new experiences and the comforts of home, makes it a high-quality read.

But I think it is fair to say I didn’t love Fifth Business enough to want to explore the two follow-up novels, The Manticore and World of Wonders. Others may feel differently.