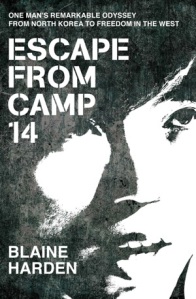 A couple of years ago I read Barbara Demick’s award-winning Nothing to Envy: Real Lives in North Korea, an extraordinary account of six ordinary citizens living in the world’s most secretive and repressive state.

Blaine Harden’s Escape from Camp 14 shows the other side of the coin: what it is like to live in — and then escape from — one of North Korea’s highly secretive labour camps. Indeed, Shin In Guen (now known as Shin Dong-hyuk) is the only person born in a North Korean labour camp to escape and tell his story.

Life as a slave

Shin was born “a slave and raised behind a high-voltage barbed-wire fence” in a concentration camp that the North Korean government says does not exist. The notorious Camp 14 is located in central North Korea, about 55 miles north of Pyongyang, and is so large — 30 miles long by 15 miles wide — that it has farms, mines and factories. It is home to 15,000 prisoners, most of whom have been sent there without any judicial process…

… and many die there without learning the charges against them. They are taken from their homes, usually at night, by the Bowibu, the National Security Agency. Guilt by association is legal in North Korea. A wrongdoer is often imprisoned with his parents and children. Kim Il Sung laid down the law in 1972: ‘[E]nemies of class, whoever they are, their seed must be eliminated through three generations.’

The book, which is based on interviews with Shin along with a Korean-language memoir he wrote (and had published in South Korean in 2007), is divided into three parts: Shin’s life and upbringing in the camp; his death-defying escape; and his new life in America.

Probably the most eye-opening aspect for any Western reader is realising that these camps exist (the author points out that North Korean labour camps have been around 12 times longer than the Nazi death camps) and that so few people know about them. The living conditions are horrendous — food is in short supply, health care is poor, accommodation is basic, there is no running water or electricity — and everyone is treated less than human and below the law.

The following quote paints a distressing portrait of daily life in the camps:

A few prisoners are publicly executed every year. Others are beaten to death or secretly murdered by guards, who have almost complete license to abuse and rape prisoners. Most prisoners tend crops, mine coal, sew military uniforms, or make cement while subsisting on a near-starvation diet of corn, cabbage and salt. They lose their teeth, their gums turn black, their bones weaken and, as they enter their forties, they hunch over at the waist. Issued a set of clothes once or twice a year, they commonly work and sleep in filthy rags, living without soap, socks, gloves, underclothes, or toilet paper. Twelve- to fifteen-hour workdays are mandatory until prisoners die, usually of malnutrition-related illnesses, before they turn fifty.

Shin was born into this environment and knew no other life — for him it was normal. He spent “twenty-three years in an open-air cage run by men who hanged his mother, shot his brother, crippled his father, murdered pregnant women, beat children to death, taught him to betray his family and tortured him over a fire” before he decided to escape.

A life of freedom

The book comes into its own when the tale of Shin’s escape is explained in heart-hammering detail. Reading it, it is hard not to think that it is all fiction, for surely the story is too surreal to be true. And even when Shin does make it across the border to China, those first few months on the run do not offer the blissful happiness of freedom you might expect — every day is agony, knowing that at any point he could be recaptured by the authorities. In fact, life is like this for almost two years, because that’s how long it takes for Shin to reach the relative safety of South Korea, where defectors benefit from special support networks set up to help North Koreans.

But it is the final part of the book that is perhaps the most heartbreaking, because Shin is so clearly traumatised and psychologically damaged by his upbringing that he struggles to adjust to his new life. Even though he manages to get himself to Southern California, where he becomes a senior ambassador for a human rights group, he has problems trusting people and making friends, does not understand the concepts of love or mercy, and finds it difficult to settle down long enough to stay in a  job or make a home — although there are plenty of support networks there to help him.

And while it probably didn’t help he had a journalist badgering him for this book, Shin’s story is such an important — and unique — one that it really had to be told.

In its matter-of-fact tone, Escape from Camp 14 reveals the full horror of North Korea’s human rights record. It is, by turns, shocking, distressing and scandalous. I read it with a growing sense of anger and outrage but came away from it feeling nothing but empathy and admiration for Shin’s courage and stoicism. This is a compelling and thought-provoking read, but I can’t help but wonder how many other North Koreans will never be quite as fortunate as Shin…

6 thoughts on “‘Escape from Camp 14’ by Blaine Harden”