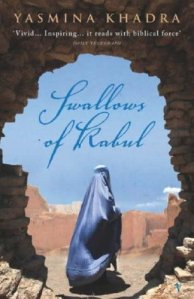 All three books explore long-established cultures being torn apart at the seams, usually from within — and while considered and intelligent, all are unbearably bleak with little joy in the narratives.

Life under the Taliban

First published in 2002, Swallows of Kabul examines what it is like for ordinary citizens to live under brutal Taliban rule before the American invasion in the wake of 9/11.

When the book opens we are immediately thrust into the dark reality of a public execution and by the time the narrative comes full circle, just 195 pages later, we are back in the stadium to see another condemned person put to death by the state.

In between, we meet two very different couples whose lives become intertwined in an inexplicably cruel and unusual way. They are: Mohsen Ramat, an educated young man who once wanted to be a diplomat; his beautiful wife, Zunaira, who has had to give up her career as a magistrate because women are no longer allowed to work; Atiq Shaukat, a jailer who guards prisoners who have been sentenced to death; and his wife, Musarrat, who is dying of an unspecified, incurable illness.

As a portrait of life under a frightening and oppressive regime, Swallows of Kabul is an illuminating and often distressing read. It is particularly good at highlighting and exploring the Taliban’s subjugation of women.

For example, Zunaira refuses to leave the house, because she doesn’t want to wear the compulsory burqua. “Of all the burdens they’ve placed on us, that’s the most degrading,” she tells her husband, before adding: “It cancels my face and takes away my identity and turns me into an object.”

But even without the Taliban’s harsh rules, women are essentially second-class citizens in this culture, so when Atiq confesses to a friend that he is distraught about his wife’s illness, he gets little sympathy: “Kick her out. Divorce her and get yourself a strong, healthy virgin who knows how to shut up and serve her master without making any noise.”

The impact on men

But the book is equally good at examining the effect of the Taliban’s rule on men. Both Mohsen and Atiq are desperately unhappy and, in a rather ironic way, emasculated because they feel they cannot control their wives.

Mohsen, who has seen his dream of a successful career shattered, is beginning to feel “infected” by the new order. In a telling scene at the beginning of the book, he gets caught up in the collective hysteria of a public execution and throws a stone at the female prisoner, experiencing “unfathomable joy” when he sees “a red stain blossom” where he has struck her. This action later torments him, so much so that when he confesses what he has done to his wife, it almost destroys their marriage.

Meanwhile, Atiq is depressed by his job in which innocent people are put to death, and his home life isn’t much better. He must look after his ill wife alone, because, for one reason and another, the couple have been abandoned by family and friends. It is a lonely existence and there is no solution in sight. He does whatever he can to avoid going home, even if that means wandering the streets in a daze.

A bleak but important read

You may have gathered that I didn’t find Swallows of Kabul a cheery read — though perhaps that’s not surprising given that it is set in Kabul, where “pleasure has been ranked among the deadly sins”.

But as an insight into a foreign culture and way of life it is very good, and it is exceptional at showing how an oppressive regime can infect and poison mindsets by spreading violence and hatred and destroying the very things that make us human.

The bleakness of the book is only bearable for two reasons. The first, is the elegant prose and the exisiqute detail of Khadra’s writing — the descriptions of Kabul are particularly good. And the second, is the narrative tension created by wanting to know how the lives of these two disparate couples will come together. When the connection becomes clear, it is both shocking and disturbing and certainly one of the more memorable endings in a novel I’ve read for quite a while…

6 thoughts on “‘Swallows of Kabul’ by Yasmina Khadra”