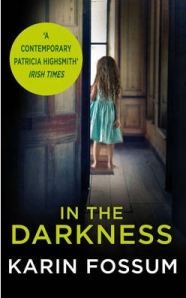 Over the years I have read several of  Karin Fossum’s perceptive crime novels. In the Darkness, first published in her native Norway in 1995, has recently been translated into English for the first time. It is the first book in her landmark Inspector Sejer series.

A body in the river

The story focuses on single mother and struggling artist Eva Magnus. One sunny day she is walking along the river with her seven-year-old daughter, Emma, when they discover a man’s body in the water.

For a few moments they stood transfixed, staring at the sodden, decomposed body as it floated, head first, in amongst the stones. He was lying face down. The hair on the back of his head was thin and they could make out a bald patch. Eva […] looked at the waxen-coloured corpse with its matted blond hair and couldn’t remember seeing him before. But those trainers — those blue and white striped high-top trainers.

Emma urges her to phone the police, but when Eva finds a public phone box to make the call she only pretends to do so. Instead, she speaks to her father and makes no mention of what she has found. She then takes Emma to McDonald’s for a Happy Meal — and tries to ignore the body in the river.

Of course, the police eventually discover the man and it’s clear his death wasn’t the result of drowning: he had 15 stab wounds in his lower back, bottom and abdomen.

Investigations by Inspector Konrad Sejer and his colleague Karlson reveal that the man had been missing for six months. He was 38 years old, married and had a six-year-old son. He was last seen when he took his car to meet a prospective purchaser: the vehicle was later found abandoned in the municipal dump.

Was he the unwitting victim of a “desperado wanting money” or did he have a large debt or know something he shouldn’t have known?

A whydunnit, not a whodunnit

The unusual thing about this novel — and this is common in all of the Fossum novels I have read — is that it’s pretty obvious from the start who committed the crime. What you don’t know is how they did it — and why.

And while In The Darkness is a shocking tale, Fossum treats her subject matter — poverty, prostitution and murder — with huge delicacy and compassion. There’s a real humanity to her writing, because she is interested in exploring the impact of the crime, not only on the victim’s family but on the perpetrator and, to a lesser extent, the police themselves.  It’s hard not to read this without feeling empathy for all the characters — guilty and innocent alike.

Finally, I just wanted to mention something about the poorly designed, rather drab cover of this particular paperback edition. The picture of a slim little girl on the front has absolutely nothing to do with the story (seven-year-old Emma is mentioned very briefly in this book and it is clear that she is a rather obese child, which doesn’t match the image used). And then there’s the roundel, which proclaims Fossum as a contemporary Patricia Highsmith — I’m not sure the two authors have much in common, aside from the fact they are both interested in the criminal mind. Does this kind of marketing bumpf really push sales?

2 thoughts on “‘In the Darkness’ by Karin Fossum”