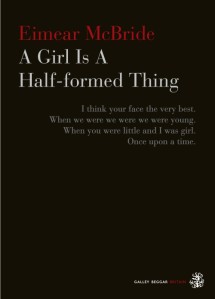 When I first heard about Irish writer Eimear McBride’s debut novel via Sinead Gleeson on Twitter, I knew I just had to read it. I ordered my copy online and then patiently waited a fortnight for it to be delivered.

When it finally arrived I delighted in the book as an object — it has French flaps, beautiful rust-red endpapers and gorgeous creamy paper — and it felt beautiful to hold. And the contents were equally impressive — bold, daring and confronting, but also highly original and quite unlike anything I had ever read before.

The story is about a young woman’s relationship with her older brother, who suffers a brain tumour in childhood that later returns when he is a young man. It spans roughly 20 years and is set largely in an isolated farming community in the west of Ireland at a time when the Catholic Church dominated every facet of a person’s life.

The first thing that strikes you about the novel is the prose style, which ignores all the usual conventions about use of the English language and quite brilliantly furrows its own unique groove. While it sputters along in fits and starts using half-formed sentences, incorrect grammar and isolated words, there are enough bursts of fluid and lucid writing to orientate the reader.

Like the very best stream-of-consciousness it puts you directly in the head of the narrator — in this case an unnamed female addressing her brother throughout — and takes you on an unforgettable journey through their thoughts and experiences.  And it is you, the reader, who must make sense of the text, which swings between dialogue, description, snippets of conversation, inner-most thoughts and emotions — often within the same sentence or paragraph. Here’s a longish example, from chapter 3, so you can get a feel for the style:

We’re living in the country cold and wet with slugs going across the carpet every night. Now when you are seven eight. Me five. This house, green growing up outside. You and me having slug scum races from the doorway to the source where it is. Get that dirty thing out of this house I don’t know where they get in. We wondered ever, seeking slug nests in the sofa. Under the grate and found a lizard running hell for leather in the ash. Come in with the coal black buckets but it was hot too hot. Under the fire in cinder we rake back and forth. It bolt out you were faster still than me. Scoop it up in time it might have been a newt I think. Get a jam jar get it. Stuck in that twig. I wallowed its turning eye. Sickish in my throat, thinking it feels like scum like slug roads. Never you ever touch it. A slap for every word of warn we get. Never. Ever. Touch. That. Dirty. Thing. It’ll. Give. You. Warts. That. Is. Di. Sgust. Ing. Still we keep its jam jar in the shed until I broke is it died of fright you said and threw it at the cat who ran. Fat cat full of shit. Oh-e oh-e oh-e what you said. Yellow squirting if you touched him. Don’t. Pick. Up. That. Dirty. Cat.

Admittedly, this kind of writing makes the book a challenging read, but once I got used to it, I found the tale an absorbing one. It helps that the narrative is punctuated by a series of profound, and often deeply troubling, events, so there’s never any fear of becoming bored by the text.

I’m not about to reveal the carefully constructed secrets within A Girl is a Half-Formed Thing, but like many Irish coming-of-age tales in which the backdrop is oppressive Catholicism and a small town, it is a far from happy one. Indeed, the narrator’s life is marred by abject poverty, appalling abuse, heart-rending tragedy — and a distressing pattern of self-destructive behaviour. At times, when she begins to go off the rails and makes a series of poor decisions, it is hard not to become distressed — and pained — on her behalf.

And the ending is just devasting.

A Girl is a Half-Formed Thing is an uncomfortable reading experience, but it’s the closest thing to James Joyce I’ve ever read and for that reason alone I’m glad to have discovered it. It’s not only a moving and memorable novel, it’s a truly literary one as well. It’s not for the fainthearted, nor is it for those who want to read time-worn narratives in a familiar structure. But if you revel in language and its ambitious use, and if you like writers to push the boundaries of what is possible in fiction, then this one ticks all the boxes.

Note that Galley Beggar Press is a relatively new independent publisher, based in Norfolk, which specialises in “quality new, contemporary and classic fiction from the British Isles”. If this book is any indication of the quality of the fiction it plans to publish, I will be following them very closely indeed….

And finally, if you want to get more of a feel for Eimear McBride’s prose style, do read a review of the novel on the TLS website.