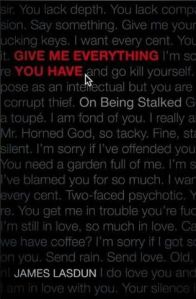 I like narrative non-fiction, especially if it is about moral issues or true crime, so James Lasdun’s Give Me Everything You Have: On Being Stalked sounded like my cup of tea.

While I can’t fault the well written, engaging and effortless prose, I found the entire “story” incredibly frustrating and just a little “icky”.

Yes, it’s upsetting that this man, a creative writing tutor, was stalked (and continues to be stalked) by a former female pupil, but at the risk of sounding judgemental, I couldn’t help but think he had brought a lot of it upon himself. When someone is clearly crazy and obsessive, you don’t fuel the craziness and obsessiveness by engaging with that person — you simply can’t reason with unreasonable people — but Lasdun seems hellbent throughout the entire sorry episode in scratching the itch and giving this woman exactly what she wants: attention.

I read this book, which publishes many of the stalker’s emails in full (and brings Lasdun’s own ethics in to question), expecting some kind of resolution to be reached by the end. But despite quite a fast-paced narrative, there’s no real resolution here.

There are some interesting tangents — Lasdun writes eloquently and thoughtfully about Middle Eastern politics, his relationship with this father, anti-Semitism and so on — but on the whole Give Me Everything You Have is a frustrating read.