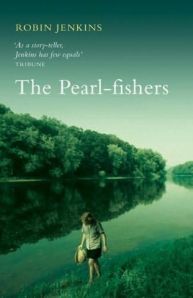 Several years ago I read Robin Jenkins’ A Very Scotch Affair and was so enamoured by it I bought several more of his novels — he has 30 to his name. Unfortunately, when I purchased The Pearl-fishers, which was heavily discounted as a Kindle edition, I hadn’t clocked it was a “lost” novel, the manuscript for which was found in a drawer after his death and published posthumously. I think this might explain why the book has a sort of unfinished feel to it and why I felt reading it was a waste of time.

Set sometime in the 1950s, the story  is about a family of pearl-fishers from Sutherland in Scotland, who travel 200 miles south because the patriarch is very ill and wants to die and be buried near his own people. Accompanying him on his journey is his middle-aged daughter and her three children — Effie, 19, Morag, 10, and Eddie, 6.

But their arrival in Argyllshire is met with hostility and prejudice by the locals, most of whom derive their living from forestry or farming, because the family are “tinkers” or “travellers” and they are viewed as dirty, thieving people who will set up camp and never leave. “We don’t want their kind here. Human trash, and not so human at that, doing their business behind bushes, like animals,” is how one of the locals puts it.

But Gavin Hamilton, a forestry worker with plans to become a church minister, invites them to camp in the field behind his house — a lovely old manse he has inherited which is due to be converted into a holiday home for children from the Glasgow slums. He later forbids them from putting up their tents: “I want you to sleep in the house, all of you.”

The third-person narrative is largely told from Effie’s point of view. She’s headstrong and feisty, but also plagued by worry and self-doubt. Her hand in marriage has been promised to a family friend 30 years her senior who tried to rape her when she was 15.  Clearly, she does not want to marry him but her options are limited.

This is where Gavin steps into the frame. He’s 10 years older, a devout Christian, well respected by the community, generous to the point of extremism (he’s renowned for once having given his whole pay packet to a tramp) and free from the prejudices that might otherwise turn him off establishing a relationship with Effie.

Of course, the plot is entirely predictable: within a week he’s asked Effie to marry him. Perhaps what is less predictable is Effie’s reaction to this — she is confused and unwilling to accept that the offer has been made with the right intentions.

If you think the story sounds a little like a fairytale, you’d be right. I couldn’t shake the feeling I was reading a Scottish version of Cinderella — without the glass slippers.

And while it’s quite a touching story and written in that kind of stripped back prose I generally like, the plot was a little too simple and the moral message it pushes too heavy-handed.

I could be wrong, but it almost felt as if this was a first draft, that Jenkins had sketched out his story arc and he would later go back and flesh it out and perhaps edit scenes that were no longer needed. (There’s a lot of repetition here, mainly about local prejudice, and the main characters aren’t well developed, they’re caricatures more than anything.) I suspect that’s why the manuscript, originally titled The Tinkers, was buried in his drawer and not published during his lifetime.

Fortunately, this hasn’t put me off exploring more of Jenkins’ work, but if you have not read him before this is definitely not the place to start.

2 thoughts on “‘The Pearl-fishers’ by Robin Jenkins”

Leave a Reply to stujallen x