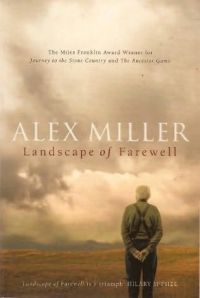 Landscape of Farewell is Alex Miller‘s eighth novel. It was first published in 2007 and shortlisted for the Miles Franklin Literary Award in 2008.

End of a life?

The story is told from the perspective of an elderly German academic, who is grieving over the death of his beloved wife, but finds new hope for his future in a rather unexpected way.

When the book opens, we meet Professor Max Otto as he prepares to die: he has the pills and the bottle of alcohol ready, but first he has to deliver his last public lecture entitled The Persistence of the Phenomenon of Massacre in Human Society from the Earliest Times to the Present — the title and subject matter is important — in front of his peers in the grand library at Warburg Haus.

After the applause has died down, he is challenged by a member of the audience — an Aboriginal Australian academic visiting Hamburg — who says: “How can this man presume to speak of massacre and not speak of my people?”

She was like a bright, exotic raptor spreading her gorgeous plumage in the midst of the ranks of these drab fowls. Her wild cry evidently called me to account. Once she had established an expectant silence, her voice rode upon it, her words filled with scorn and contempt. She was a woman in command of her audience and was clearly intent upon defending territory. In other words, she was young, intelligent and ambitious. With a touch of annoyance, I realised that I was not going to be permitted to slip away without being required to answer for my shoddy paper.

While Max is slightly stunned by the encounter, he’s not too worried by it — his suicide awaits. But on the walk home, his accuser, Vita McLelland (whom I suspect is a thinly veiled version of Dr Anita Heiss) confronts him again and the pair end up going for a drink, which distracts Max from his planned death.

The pair strike up a surprising friendship, and Max is invited to Australia to talk at a conference Vita is organising. During his visit he spends several weeks staying with Vita’s uncle, a cultural adviser and Aboriginal elder, in the Queensland bush, where he finally comes to terms with a past he has long sought to forget.

Sins of the fathers

The most surprising element of this book is the way in which it focuses on the “sins of the fathers” without ever once mentioning the word “Nazi” or term “Jewish holocaust” — and yet, clearly, this is what Max has been struggling with his whole life:

The subject of massacre, however, had obsessed me for a time in my youth, but I had found myself unable to make any headway in it owing to my emotional inhibitions, not least of which was a paralysing sense of guilt-by-association with the crimes of my father’s generation, and after several false starts I had abandoned the subject and fallen silent. It had remained an unexamined silence throughout my life and was my principal regret.

This keeping quiet about troubling events — or, as Vita puts it, “our inability to memorialise the deeds of our fathers” — is something shared by Vita’s uncle, the quiet and hard-working Dougald, whose great-grandfather, the warrior Gnapun, was responsible for the massacre of a white community in which 19 people died*.

When Dougald shares this story with Max, he asks Max to write it down for him so that it can be passed on to others and not die with him. This allows Max to see that there are ways to tell the truth about subjects that are hard to talk about and that shameful pasts are not unique to Germans unable to deal with what happened in the Second World War.

What I loved most about Landscape of Farewell is the way Miller takes two seemingly disparate cultures — Germans and Indigenous Australians — and shows their surprising similarities. Indeed, the message seems to be that we are all human, are all troubled by past wrongs but that it is up to successive generations to deal with that and to find their own truth in order to move forward.

But this is also very much a book about silence and the ways in which men find it difficult to open up to one another. It’s a significant turning point in the novel when Max and Dougald finally talk about important matters, because it is only then that the pair — and Max in particular — can reconcile their own individual pasts with the history of their respective countries.

At this point it would be remiss of me not to point out that the landscape of the Australian bush plays a strong role in the novel too, for it is the silence of these wide open spaces that gives Max room to think, which, in turn, aids his “recovery”.

Landscape of Farewell is a wise, knowing and intelligent novel, not only about grappling with history, but of growing old, forging friendships and being kind to one another. It makes me even more keen to read the rest of Miller’s prize-winning back catalogue.

* In his Acknowledgements, Miller says this is based on the Cullin-la-Ringo massacre, supposedly the largest-ever massacre of white settlers by Indigenous Australians in Australia’s history. You can read more about this event at Wikipedia.

6 thoughts on “‘Landscape of Farewell’ by Alex Miller”