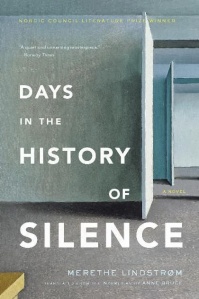 Fiction – paperback; Other Press; 224 pages; 2013. Translated from the Norwegian by Anne Bruce.

A couple of wet and wild Fridays ago I managed to escape the office an hour early and treated myself to a little browse in Daunt Books on Cheapside. I wasn’t looking for anything in particular, but for some reason I was drawn to Merethe Lindstrøm’s Days in the History of Silence and kept picking it up.

I had never heard of the author, nor the book, but I decided I had to buy it. There was something about it which suited my mood and the mood of the weather — cold, damp, melancholic. As it turns out, it proved to be a rather morose but elegant and thought-provoking read, perfect for a rainy weekend.

The story is about a Norwegian couple, Eva and Simon, who are living quiet lives in retirement — he was a physician, she was a high school teacher. But this is no ordinary couple. They have spent their entire married life together keeping secrets from their children — three daughters, who are now grown up with families of their own.

The first is that Eva had a child out of wedlock before she met and married Simon —  she gave her son up for adoption when he was six months old and has never seen him since, although she has often thought about him and once tried to track him down (secretly, of course).

The second is that Simon is a Jew from Eastern Europe, whose family went into hiding when the Nazis came to power. He was the sole survivor of the Holocaust — everyone else he knew perished in the extermination camps — but he later discovered that he had a cousin living in Berlin, which revived traumatic memories and plunged him into a severe depression.

Now, in their later lives, Eva and Simon have another secret to keep: they have dismissed the home help they hired (under pressure from their daughters) for reasons they don’t wish to discuss.

The story is narrated by Eva, so that we only ever hear her side of events, but it is clear she loves Simon very much and that she is worried about him — he has recently become incredibly reticent and is showing signs of dementia.

His silence came gradually over the course of a few months, half a year. He might say thanks for the meal or bye. He has become as formal as a hotel guest, seemingly as frosty as a random passenger you bump into on a bus. Only now and again do I see him standing gazing out the window or smiling at something he is reading or watching on television, and I think he is back. As though it really is a journey he has embarked upon. But if I ask what he is watching, what is amusing, he just looks at me uncomprehendingly. The physician, one of his junior colleagues, say he has quite simply become old. The solution, for of course there are solutions to situations like this, why should we consult a physician otherwise, is a centre for the elderly, a day care centre where Simon spends time twice a week.

Now the daughters are putting pressure on Eva to consider putting him in a home, something she tries to ignore for as long as possible. Meanwhile, she finds herself mourning the loss of Marija, the home help, whom she treated as a substitute daughter. All of this forces her to think about her life and her marriage, episodes of which are recalled flashback style in prose that is both elegant and incisive.

Failure to deal with the past

So, while the book is essentially about marriage and family — in particular, what it is to lose family members, whether by giving them up for adoption or having them die in the Holocaust — it’s also a heartfelt and moving treatise on growing old and what happens when we suppress memories or fail to talk about sensitive subjects for such a long time.

Admittedly, it isn’t a particularly cheerful read, but it’s an intimate portrait of an elderly woman grappling with her past and her future, trying to do the right thing for her own sake and the sake of her husband. I found it a highly focused and intelligent read, brimful of humanity, wisdom and psychological insight. It’s infused with a gentle melancholia and leaves one aching to be upfront and transparent with the ones you love.

Days in the History of Silence won the Norwegian Critics’ Prize for Literature in 2011 and the Nordic Council’s Literature Prize in 2012.