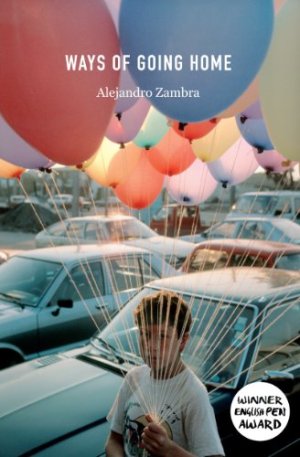 Alejandro Zambra has been described as the most important Chilean author since Roberto Bolaño. He was named on the Bogotá39 list (39 of the most promising Latin American writers under the age of 39) in 2007 and selected as one of Granta’s Best of Young Spanish-Language Novelists in 2010.

I read his second novella, The Private Life of Trees, in 2011 and was intrigued enough to want to read his latest, Ways of Going Home, which won the 2013 English PEN Award for outstanding writing in translation.

But reviewing this short work of fiction is not a straightforward task. There’s an ephemeral quality to it, like waking from a pleasant dream knowing you will never be able to recapture the feeling of it. It’s difficult to try to figure out the shape of the narrative, but it’s written in such eloquent, stripped-back prose, the story slips down as easy as hot chocolate — though the themes are far from sweet.

Set in the author’s native Chile, it uses the devices of metafiction to explore memory, love, truth, deception, guilt, family life and political responsibility. It particularly focuses on the generation born after Pinochet came to power in 1973 and how, in young adulthood, they have had to come to terms with uncomfortable truths: that their parents were either victims or accomplices in the murderous dictatorship that lasted for 17 years.

Freedom under a dictatorship

The book opens with an unnamed nine-year-old boy, living in suburban Santiago in 1985, musing on the fact his parents haven’t always known best. Indeed, this turns out to be a metaphor for the entire book:

Once, I got lost. I was six or seven. I got distracted, and all of a sudden I couldn’t see my parents anymore. I was scared, but I immediately found the way home and got there before they did. They kept looking for me, desperate, but I thought that they were lost. That I knew how to get home and they didn’t. “You went a different way,” my mother said later, angry, her eyes still swollen. You were the ones that went a different way, I thought, but I didn’t say it.

We get a feel for the suspicious nature of life during the dictatorship when the boy’s parents refuse to have anything to do with their neighbour Raúl — a single man who lives alone — for fear he comes from a different political class. The boy cannot escape this sense that the man is dangerous, for he is enlisted by Raúl’s 12-year-old niece, Claudia, to spy on him — “to keep an eye on his activities and make notes about anything that seemed suspicious”.

But despite the political troubles, life for the boy, his parents and their friends is relatively contented and free.

We lived under a dictatorship; people talked about crimes and attacks, martial law and curfew, but even so, nothing kept me from spending all day wandering far from home. Weren’t the streets of Maipú dangerous then? At night they were, and during the day as well, but the adults played, arrogantly or innocently — or with a mixture of arrogance and innocence  — at ignoring the danger. They played at thinking that discontent was a thing of the poor and power the domain of the rich, and in those streets no one was poor or rich, at least not yet.

It’s not until the book switches tack in the second part that we can begin to understand the “disease” of the middle classes who preferred to keep their heads down rather than confront the wrongs (mainly unexplained “disappearances”) happening around them. Zambra does this by turning the narrative on its head: he makes the unhappy protagonist in the second part the writer of the novel begun in the first part. Through this we learn that he has suspicions that his own father sympathised with the Pinochet regime, all the while claiming he was apolitical.

While he continues working on his novel about an unnamed boy and his childhood friend Claudia, the protagonist tries to patch up the relationship with his estranged wife, Eme. Their vexed lives strangely mirror events that later appear in his novel when the “boy”, now in his 30s, starts a sexual relationship with Claudia. It blurs the lines between writer, narrator and character, so that the reader begins to question what is real and what is not.

If you haven’t guessed already, this is not a straightforward easy-to-follow narrative. But Ways of Going Home is one of those clever books that shines a light on the gaps between fiction and reality. By setting it in the context of Chile’s troubled past, it also explores the thin line between complicity and innocence. The way in which it weaves the personal with the political makes it a complex but sophisticated read. Even if you know nothing about Chilean history, it will make you think about childhood, the different ways we “go home”, understanding your parents’ decisions and beliefs, and the importance of finding your own truth to live by.

5 thoughts on “‘Ways of Going Home’ by Alejandro Zambra”