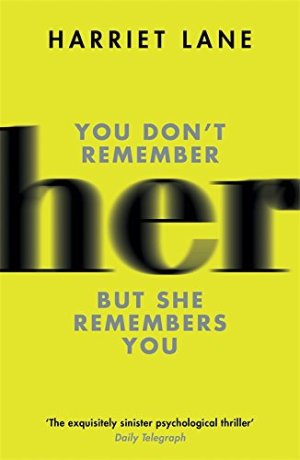 Whenever I’m feeling under the weather I love nothing more than curling up under the duvet with a good psychological thriller: something that’s fast-paced and won’t tax my brain too much. So this weekend, after four very intense weeks at work (in the lead-up to my Christmas break), I finally succumbed to a horrid head cold. Thank goodness, then, for Harriet Lane’s latest novel, which was an effective diversion from the aching sinuses, the snotty nose and the ever-increasing mountain of used tissues by my side.

Some of you may recall that I read Lane‘s debut novel, Alys Always, in the summer and loved the story of a manipulative young woman who inveigles her way into the life of a rich author, so I was looking forward to her new one.

Her, which was published in hardcover in June and is due for paperback release next month, is cut very much from the same kind of cloth. It’s a proper page turner that brings to mind the likes of Nicci French — one of my favourite psychological thriller writers — but never slides into farce or violence. Instead it’s rooted very much in the every day, which makes it all the more sinister.

The story revolves around the unlikely friendship between two women, both of whom are around the same age: Emma has given up a TV career to have children and is caught up in the day-to-day struggle to raise two young ones while her husband juggles a freelance job that barely covers the bills; and Nina is a successful artist, with an equally successful architect husband and a 17-year-old daughter (from her first marriage).

The pair meet when Nina returns Emma’s wallet, which she claims to have found on the local high street. What Emma doesn’t realise — and which Nina takes great pains to disguise  from her “new” friend — is that the pair met 20 years earlier, as teenagers.

As Emma and Nina’s lives become more and more entwined over the course of the novel, it becomes clear (to the reader) that Nina is a rather nasty piece of work, hellbent on wreaking revenge on a rather hapless and naive Emma. But she does it in such a smooth, almost guileless way, that no one seems to notice, making her behaviour all the more chilling.

Both Emma and Nina take it in turns to tell their version of events in alternate chapters, which is a great device for building tension. It also shows Emma’s desperation to be viewed as a person (rather than a mother, whose life now revolves around “scraping and rinsing and wiping and sweeping”) in contrast with Nina’s chilling level of self-control. But if I was to fault the novel it would be that the two voices are barely distinguishable from one another.

However, that doesn’t really matter, because what makes Her work as a page turner is two-fold: we never quite know what is motivating Nina — what is it that Emma did that requires this level of well-plotted revenge? — and will Emma cotton on to the threat before it’s too late?

Admittedly, the denouement falls a bit flat, but I loved the slow-building of suspense and my inability to guess Nina’s next move. It’s a deeply unsettling read that feeds into every mother’s deepest fears — and the danger that lurks where we least expect it.

8 thoughts on “‘Her’ by Harriet Lane”