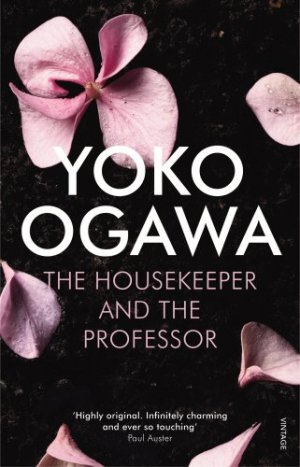 After working my way through a slew of dark novels, how wonderful to pick up Yoko Ogawa‘s The Housekeeper and the Professor — published under the title The Gift of Numbers in some territories — which proved to be a rather charming read.

A housekeeper and her client

First published in Japan in 2003 but set in the early 1990s, the book traces the relationship between a young housekeeper and her client, an elderly mathematics professor whose short-term memory only lasts 80 minutes. This means that every morning when she arrives on his doorstep to begin her shift, she must introduce herself, because he cannot remember who she is.

“What’s your shoe size?”
This was the Professor’s first question, once I had announced myself as the new housekeeper. No bow, no greeting. If there is one ironclad rule in my profession, it’s that you always give the employer what he wants; and so I told him.
“Twenty-four centimetres.”
“There’s a sturdy number,” he said. “It’s the factorial of four.”
He folded his arms, closed his eyes, and was silent for a moment.
“What’s a factorial?” I asked at last. I felt I should try to find out a bit more, since it seemed to be connected to his interest in my shoe size.
“The product of all the natural numbers from one to four is twenty-four,” he said, without opening his eyes. “What’s your telephone number?”
He nodded, as if deeply impressed. “That’s the total number of primes between one and one hundred million.”
It wasn’t immediately clear to me why my phone number was so interesting, but his enthusiasm seemed genuine. And he wasn’t showing off: he struck me as straightforward and modest. It nearly convinced me that there was something special about my phone number, and that I was somehow special for having it.

Initially, the housekeeper is slightly wary of the Professor — she is the ninth housekeeper he has had in a very short space of time — but it doesn’t take long for them to develop a good working relationship. Their conversations mainly turn around numbers, because they “were his way of reaching out to the world”.

Later she is  given permission for her 10-year-old son to come to the Professor’s house after school. The Professor dubs him Root after the square root sign — “a generous symbol, it gives shelter to all the numbers” — and helps him with his homework.

A love of mathematics

The narrator’s quiet, understated voice draws you in as she begins to understand that the Professor sees numbers as a source of comfort. Over time, she, too, develops a love of numbers.

In school, I had hated math so much that the mere sight of the textbook made me feel ill. But the things the Professor taught me seemed to find their way effortlessly into my brain — not because I was an employee anxious to please her employer but because he was such a gifted teacher.

Not a great deal happens — this isn’t an action-packed book with a fast-moving plot — but it’s such an endearing story that it’s difficult not to be moved by its simplicity and its quiet little moments of triumph, joy and sadness. Its tinged with nostalgia and melancholia, but is never depressing or “heavy”.

The Housekeeper and the Professor is a novel about finding order in a world of chaos. It’s a wonderfully refreshing look at making connections with people in a way that defies the usual societal conventions and is written in eloquent prose dotted with theorems and equations, which read like poetry.

Despite the fact the trio — an uneducated single mother, a young boy and a learned man with a head injury — seem to have nothing in common, a shared love of baseball brings them together (thanks to all the statistics related to batting averages, home runs and so on). Without them even realising, they form a kind of family based on mutual respect, trust and friendship. And I loved spending time with them.

11 thoughts on “‘The Housekeeper and the Professor’ by Yoko Ogawa”