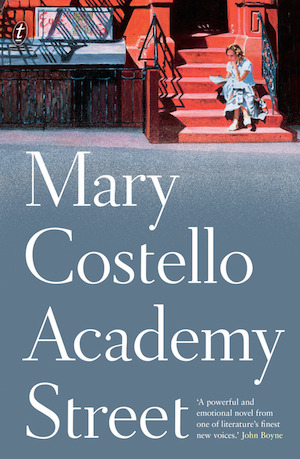 Mary Costello’s Academy Street won the 2014 Eason Novel of the Year Award at the Irish Book Awards — and it’s my book of the year, too.

It’s a debut novel but has been written with all the assuredness and maturity of someone who’s been honing their craft for years. Unsurprisingly, the author is an accomplished short story writer — her work has been anthologised and published in New Irish Writing and The Stinging Fly and her first collection, The China Factory, was published to critical acclaim in 2012.

The book charts the life of Tess Lohan from her girlhood in rural Ireland to her retirement in New York more than half a century later.

Told in the third person, it reveals a woman who’s a little afraid of grabbing life by the horns despite the fact she has the courage to emigrate to the US alone with little more than the clothes on her back. Here, in 1950s Manhattan, she has the inner strength and determination to create a new life for herself — she finds an apartment of her own, becomes a nurse and brings up a child — but she remains a quiet and shy person: she’s reticent, lacks self-confidence and never really knows “what to do or how to act”.

Occasionally she thought about retiring, moving house, taking a trip back to Ireland, but she did none of these things. There was, in her nature, a certain passivity, an acquiescence that was ill-suited to change or transformation, as if she feared ruffling fate or rousing to anger some capricious creature that lay sleeping at the bottom of her soul.

Throughout this short, powerful novel, we follow Tess’s ups and downs — her occasional periods of happiness, her heartbreaking disappointments, her successes, her failures — and throughout it all her forbearance and stoicism shines through.

But aside from a friendship she develops with a female neighbour, she always feels at a distance from others and is unable to create the kinds of connections she so desperately craves:

All evening long she smiled and mingled, but she felt remote. It seemed at times that she was marooned on an island, a moat of water, wide and black, separating her from all human love.

Like many lonely people she finds solace in books, and some of the most touching scenes describe her very strong feelings towards novels and literature.

Tess found a new life in books. […] The mere sighting of a book on her hall table or night stand as she walked by, the author’s name or title on the spine, the remembrance of character — his trials, his adversity — took her out of ordinary time and induced in her an intensity of feeling, a sense of union with that writer. […]The things she hankered after — encounters with beauty, love, sometimes the numinous — she found in books. […] She became herself, her most true self, in those hours among books.

Because Academy Street condenses one woman’s life into just 193 pages, some aspects feel a little rushed or skipped over, but that’s a minor quibble.

I fell in love with this book from the first page. It’s written in that lovely lyrical style reminiscent of the best Irish fiction — think a cross between Colm Toibin’s Brooklyn and Sebastian Barry’s On Canaan’s Side — but has a distinctive voice all of its own.

It so encapsulates the human condition — our desperate desire to fit in, to make meaningful connections with others, to feel as if we are worth something to someone — it’s easy to identify with Tess’s situation. Adrift from her own family — and her own country — her sense of isolation resonates off the page. But while it’s quite a sad story, it’s more bittersweet than depressing and is never sentimental or cloying. It’s poignant and has an undercurrent of melancholia, but is punctuated with quiet moments of joy.

Tess Lohan’s life might be quiet and understated but the impact on the reader is nothing less than devastating.