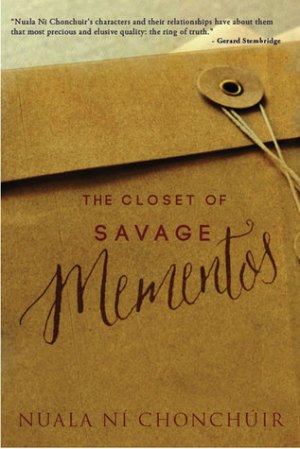 In late 2013 I read Nuala Ní Chonchúir’s astonishing debut novel You, which was about a young girl growing up in 1980s Dublin. Told in the present tense and in the second person (from the viewpoint of the girl), it was a truly memorable read, and when I heard the author had a new novel coming out I promptly bought myself a copy.

The Closet of Savage Mementos is perhaps the grown-up version of You, seeing as it tells the story of a young woman grappling with love, loss and difficult family relationships, who, some 20 years later, must confront the confusion, grief and anger associated with her past.

It’s a quietly understated read but hugely evocative of time and place, written in a straightforward prose style that brims with humanity and real emotion. It was only after I finished the novel that I discovered it was largely based on Ní Chonchúir’s own life, which only serves to make it a more poignant and profound read.

A novel in two parts

The book is divided into two parts. The first is set in 1991, when Lillis Yourell, a budding photographer who works part-time in a camera shop, takes a summer job as a waitress in the Highlands of Scotland. It’s something she’d been planning for a while, but when her best friend and sometime lover, Donal, dies in a motorbike accident it’s a way of clearing her head and coming to terms with her grief. It’s also a chance to escape her visual artist mother, Verity, an alcoholic with a tongue that cuts like a knife — “I hate people who remind me of myself. And Lillis reminds me so much of me that I could kill her” — and to ensure her gay brother, Robin, shoulders some of the responsibility of “parenting” her.

While in Scotland, Lillis falls for a much older man, and their romance, played out under the eyes of the small tourist community of Kinlochbrack, offers much-needed solace during a time of loneliness, but it also has unforeseen consequences that change Lillis’s life forever…

The second part of the book is set 20 years later. Lillis is 41 and back living in contemporary Dublin, where she continues to deal with her difficult mother, “a dyed-in-the-wool contrarian”. She’s recently married for the first time and just had a new baby. Life is interesting but what happened in Scotland all those years ago still niggles.

I don’t want to spoil the plot, so you’ll have to read the book, but let’s just say Lillis has the courage to confront — and reconcile — her past, and it’s rather lovely and sweet and tear-inducing.

As ever, the writing in this novel is gorgeous, probably not surprising given the author is also a poet. But open any page and there are sentences that sing, little descriptions that really capture a scene or a moment in new and fresh ways: the “navy lumps of the hills opposite are like whales, huge and motionless”, a baby’s “skin is butter soft” and he has “lamb-chubby thighs”; a blue paperweight with bubbles of glass around a piece of seaweed “looks like fireworks have gone off underwater”.

And the characters are wonderfully drawn, though some, such as Robin, are frustratingly unknowable, probably because we only ever really see things from Lillis’s point of view.

The Closet of Savage Mementos could be called a coming-of-age story, but I think it’s more firmly rooted in a sharply observed “life story” and how the arrival of motherhood changes the perception of ourselves and our own mothers. Indeed, if there is an overriding theme it is that the thing Lillis fears most is turning into her mother, based, I suspect, on the belief that bad parenting causes bad parenting.

Robin bent towards me. “Hey, do you remember the time you broke her china jug and the two of us buried it in the bottom of the garden? I was thinking about that yesterday.”
[…]
“God, I’d kind of forgotten about that day. She kept at us and at us until we showed her where we’d hidden the bits.”
“Then she locked us under the stairs. Good old Verity and her brilliant parenting.”

The book deals with some heavy subjects related to parenthood, marriage, siblings, betrayal, grief, death and alcoholism, but the author keeps a tight rein on the narrative and never lets it turn into a misery memoir. It’s lightened by moments of gentle humour — even the idea of Verity collecting roadkill to turn into “taxidart” is quite funny:

“She skins and mounts them and dresses them in costumes […] she was presented with a monkey recently; she gave it a pipe, a pinny and high heels.”

But in essence The Closet of Savage Mementos is just a great read. It’s a raw, honest and uncompromising novel about one woman reconciling her past with her present. I loved it.