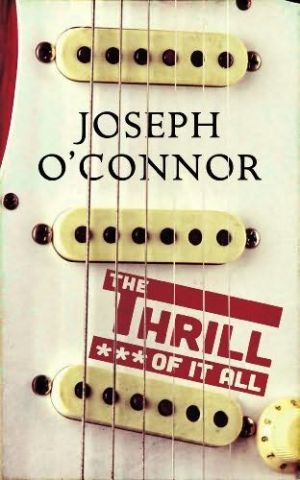 If anything is ripe for satire it is rock journalism and rock biographies. They’re so filled with clichés and stereotypes, how could you not want to send them up?

Film-makers have already done so with the 1984 cult classic “mockumentary” This is Spinal Tap, which satirises the so-called wild antics of a fictionalised heavy metal band, and the more recent BBC4 TV series, Brian Pern: A Life in Rock, which lampoons Peter Gabriel’s career (with Peter Gabriel’s endorsement).

Now Irish writer Joseph O’Connor has entered the fray with his latest novel, The Thrill of it All, which is the fictionalised memoir of a guitarist from a rock band that made it big in the 1980s.

My name is Robbie Goulding. I was once a musician. For five years in the 1980s I played guitar with the Ships. This memoir has been long in the making.

Now this is where I offer a caveat. I’m a huge music fan. I spent my teenage years and all of my twenties amassing the greatest collection of rock cassettes (remember them?) and CDs known to man, I went to countless gigs and had subscriptions to all the leading music magazines of the time, including Rolling Stone and Q. I viewed this as a kind of “male” hobby because none of my female friends were really into music — certainly not to the same extent I was. I would pour over sleeve notes and CD covers, learning all the connections between producers and session musicians, and explore new genres and discover new bands in much the same way I now do with books.

But when I read novels about music they never quite work for me. I think that’s because music is so special and ephemeral and subjective, how can you possibly translate that into the written word? How can you capture the way it makes you feel? And it probably doesn’t help that over the years I’ve read way too many non-fiction books about musicians and bands (here’s just a handful reviewed on this site), so it always feels a bit superfluous: why invent something when you could just read the real thing?

So, with that in mind, I picked up this book not really expecting to get along with it. But I needn’t have worried. O’Connor, who is a music fan himself (I actually saw him play guitar and sing at Dublin’s Abbey Theatre when he did a special gig with lots of Irish musicians called The Music of Ghost Light in 2011), doesn’t try to write so much about the music but the people who make it. He covers all the clichés — the lousy gigs with just two people in the audience, the struggle to get a record deal, the infighting, the sex, the drugs and so on — but he does it with his tongue planted firmly in his cheek but without ever turning it into farce or mockery. It actually feels like a book with a heart: you care about the people in it.

Life as a rock star

The Thrill of it All spans 25 years and tells the story of Irish-born teenager Robbie Goulding’s climb to fame and subsequent slide into obscurity. It’s largely set in Luton, England, a light industrial town 30 miles north of London, where he forms a band with Vietnamese-born Francis Mulvey, a Marc Bolan-type figure, who is charismatic and troubled but has a great singing voice.

When I first encountered Francis, in college in the eighties, he would pitch up for lectures sporting more lip frost and blusher than Bianca Jagger at Studio 54. Apart from on television, he was the first male I ever saw in eye shadow, a weird shade of magenta he sourced by trawling theatrical-supply shops. ‘They use it for murderers and whores,’ he’d explain, with the insouciance of one on terms with both.

Joining them is cellist (and love interest) Sarah-Thérèse Sherlock and her twin brother Sean on drums.

When the book opens we know that Robbie and Fran have had a falling out and that Fran is elusive but still famous in a kind of David Bowie-type of way — there are countless “unauthorised biographies, a feature-length documentary, profiles and fanzines and blog sites and newsgroups” about him. But we don’t really know how they got to this point: that is all slowly revealed over the course of the narrative which is made up of Robbie’s own thoughts, interviews — conducted on radio and TV chat shows in the past and by Robbie’s daughter (and editor) Mollie Goulding specifically for the memoir — lyrics and diaries.

It charts the Ship’s steady rise in the UK and then its big success in America, where the band is courted by the rich and famous and where they make so much money they don’t know what to do with it. The excesses reveal themselves in typically predictable ways — um, drugs, anybody? — and before long it all goes to hell in a hand basket.

But even though O’Connor is deliberately working with stereotypes, his characters are richly drawn and always believable. They have hearts and souls, worries and troubles, dreams and ambitions. Indeed, it’s entirely possible that you could take any successful band from the 1980s and simply change the names, and this story would more or less match the one in this novel, that’s how realistic and spot-on it feels.

The narrative, which fast-forwards and rewinds (see what I did there) over time, is filled with vivid detail — of the era, of the music, the fashions and the politics of the day. It’s also peppered with great one-liners and playful, comic scenes that had me tittering in joyful recognition. It’s never cheesy, but often honest and raw.

I’ve seen some reviews bill The Thrill of it All as being a book for anyone who’s dreamt of being a rock star, but I’d say it’s appeal is far wider than that: it’s for anyone who loves music — blues, ska, New Wave, punk and rock especially.