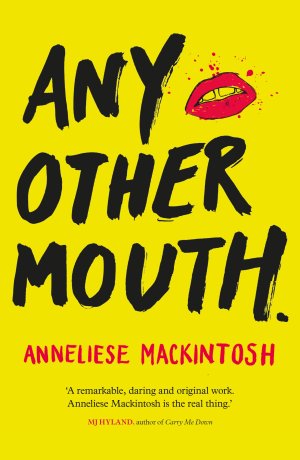 Anneliese Mackintosh’s Any Other Mouth won last year’s Green Carnation Prize, a prize awarded to LGBT writers for any form of the written word, from memoir to fiction, poetry to non-fiction. The book is difficult to classify, because even though it’s novelistic it feels very much like a memoir, and it’s structured around a serious of almost stand-alone chapters, so it could also be viewed as a short story collection, too.

Not that any of this matters, because pigeonholing Any Other Mouth does it a disservice: it offers a fascinating glimpse of one young woman’s struggle with identity, depression and grief after the death of her father. Think Slyvia Plath’s The Bell Jar meets Eimear McBride’s A Girl is a Half-Formed Thing and you’ll be in the right ball park.

Gretchen, the first person narrator, has a distinctive and likeable voice, but from the outset it’s clear she’s a little messed up and in need of some direction, none of which she gets from her widowed mother (who has her own set of kooky problems), nor her younger sister.

My grief is bigger than your grief. My grief is so big it stretches my skin. My grief is so strong it crushes my bones. So hard it gives me black eyes. So cold I weep icicles. And my grief is so long that it dangles over my food when I’m trying to eat, causing me to throw up onto my plate, and onto my grief.

The story flips backwards and forwards in time. Many of the chapters are simply about incidents from Gretchen’s past that she’s recalling. Some of it revolves around her childhood and memories of her father, but much of it is about her time at university, where she was clearly bright (she did a PhD, but failed it), yet was never able to settle down. This worsened when her father became ill.

There’s not much of a plot, though there is a sense of movement — of Gretchen trying to break through her grief so that she can make sense of herself and her future — but Any Other Mouth is largely a character study, even if that character is enormously self-absorbed and immature. You get the sense this is a young woman on the edge of a nervous breakdown, constantly looking for her rightful place in the world and desperate for the love and attention she can’t seem to get from her own family, nor the dizzying succession of lovers (of both sexes) that she takes up with.

Written with a lightness of touch — “frothy” is a word that kept recurring during my book group’s discussion of this book — it is fast-paced and imminently readable. But this shouldn’t be mistaken for frivolity or superficiality, because Mackintosh addresses some important and “heavy” themes including sex, sexuality, mental illness, self-harm and drug use. I was particularly shocked by Gretchen’s experience on a night out in which she was gang raped by a group of strangers in a pub, a secret she kept to herself for years. For this reader at least, it was like being walloped over the head with a frying pan. But it also explained a lot about why this young woman was so mixed up and “damaged”.

As this might suggest, it’s a very raw and confronting read in places. It includes painful truths about growing up and trying to carve your own path in the world when things around you are falling apart and you’re not quite sure which direction to take. But it’s not a miserable book: among the pain and sadness there’s humour too — Mackintosh is exceptionally good at capturing the absurdity of student life and living in a shared household for the first time, for example.

But for all its strengths, Any Other Mouth does feel like a series of creative writing exercises strung together (many of the chapters have been published as stories in literary magazines and journals, and some have even won prizes), so it will be interesting to see what this author tackles next. A more traditionally structured novel, perhaps?

7 thoughts on “‘Any Other Mouth’ by Anneliese Mackintosh”