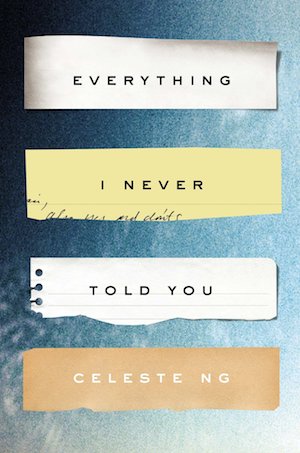 Lydia is dead. But they don’t know this yet. 1977, May 3, six thirty in the morning, no one knows anything but this innocuous fact: Lydia is late for breakfast.

So begins Celeste Ng’s Everything I Never Told You, a novel about the disintegration of a family in the wake of the eldest daughter’s death, which my book group chose for its March discussion.

The book is hugely popular — it’s been a A New York Times bestseller, a New York Times Notable Book of 2014, and was named as Amazon’s #1 Best Book of 2014 — and it’s easy to see why: it’s an effortless read and hugely engaging. I wanted to eat it up in one greedy gulp. Despite the tragedy at its heart, it’s a truly compelling story written in prose so polished it practically gleams. The characters are well drawn, if not always likeable, and the author fleshes out their fears and foibles to make them feel (frustratingly) real.

But two weeks after having read it, I struggled to even remember the most basic of details — the character’s names, for instance — and had to skim read sections to familiarise myself with it again prior to our book group meeting. This is not to suggest it’s a fluffy read, for it is not, but much like the convoluted title, it’s not exactly memorable. Yet if you had have asked me what I thought of Everything I Never Told You in the immediate afterglow of finishing  it, I would have said it was near perfect. Now? I’d describe it as very good — and I’d probably give it four stars.

A family in free fall

So, what’s the story about? Essentially it focuses on what happens to individual members of the Lee family following the death of 16-year-old Lydia, who drowned in the lake behind the family home. Initially, it’s not clear whether her death was an accident, homicide or suicide, but this book is not a crime novel: it’s an exposé on closely-held secrets, family history, parental expectations, sexual equality, identity, racism and grief.

Lydia’s parents have an inter-racial marriage — Marilyn is white, James is first generation Chinese American — so their children are mixed race. And in Ohio in the 1970s, when this story takes place, that sets this family apart. James, especially, has struggled his whole life to fit in, to be accepted as a “true” American, but has never felt comfortable in his own skin. This unease is passed on to his children — Nathan, Lydia and Hannah — as this extract, from Lydia’s point-of-view demonstrates:

Sometimes you almost forgot: that you didn’t look like everyone else. In homeroom or at the drugstore or at the supermarket, you listened to morning announcements or dropped off a roll of film or picked out a carton of eggs and felt like just another someone in the crowd. Sometimes you didn’t think about it at all. And then sometimes you noticed the girl across the aisle watching, the pharmacist watching, the checkout boy watching, and you saw yourself reflected in their stares: incongruous. Catching the eye like a hook. Every time you saw yourself from the outside, the way other people saw you, you remembered all over again. You saw it in the sign at the Peking Express—a cartoon man with a coolie hat, slant eyes, buckteeth, and chopsticks. You saw it in the little boys on the playground, stretching their eyes to slits with their fingers—Chinese—Japanese—look at these—and in the older boys who muttered ching chong ching chong ching as they passed you on the street, just loud enough for you to hear. You saw it when waitresses and policemen and bus drivers spoke slowly to you, in simple words, as if you might not understand. You saw it in photos, yours the only black head of hair in the scene, as if you’d been cut out and pasted in. You thought: Wait, what’s she doing there? And then you remembered that she was you. You kept your head down and thought about school, or space, or the future, and tried to forget about it. And you did, until it happened again.

This desperation to belong — and to keep her parents happy — puts untold pressure on Lydia, pressure that James thinks may have led to her death. But this isn’t just about race, because Marilyn, too, has unwittingly added to Lydia’s burden by pushing her at school in order to become the professional career woman Marilyn was unable to become.

Portrait of a marriage

The book has a seamless narrative that spools backwards and forwards to focus on individual family members — including Lydia — before and after Lydia’s death. Central to this is the Lee’s marriage, which the author examines in exacting (and compelling) detail, tracing James and Marilyn’s relationship from the moment they met — she was a college student, he was a tutor — until it splinters under the weight of grief.

There’s an alarming lack of communication between them — neither knows the other’s innermost dreams or fears or desires. The only thing keeping them together is their children and, in particular, Lydia, who is fawned over as the “favourite” child, the one whom will fulfil their hopes and ambitions.

Their other children — space-obsessed Nath, who is never praised or encouraged in any of his intellectual pursuits, and young Hannah, who hovers around the edges, observant but ignored and somewhat neglected by her elders  —  must battle their grief alone.

It might sound like a heart-breaking read — and it is — but Ng pulls back from making it too cloying or sentimental. Perhaps the only faults are that we never quite get to know Hannah as well as any of the other characters — she’s simply a vehicle to observe the family’s breakdown — and the racism/identity theme gets slightly overplayed. But on the whole Everything I Never Told You is an astonishingly mature piece of work for a debut novel. Its precise, often painful observations about our deep need to belong makes it a powerful, heart-felt and intimate read. And I completely understand why so many people have been held in its sway.

21 thoughts on “‘Everything I Never Told You’ by Celeste Ng”