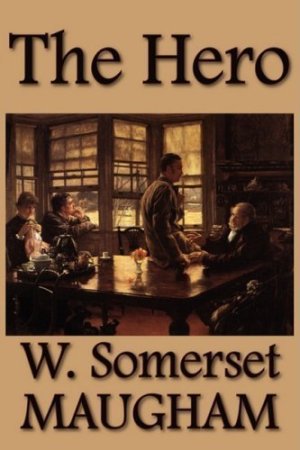 A couple of years ago I read W. Somerset Maugham’s semi-autobiographical masterpiece Of Human Bondage and loved its mix of grim reality, heartbreak and poignancy. I didn’t review it at the time, but it did make my list of favourite books of 2013, and I made a mental note to explore more of his work.

The Hero is probably one of his lesser-known novels. First published in 1901 — fourteen years before Of Human Bondage — it explores social mores, class and morality in Victorian England. And yet there’s something quite modern about the story, which shows how a man’s outlook on life can be changed by worldly experience, and how inward-looking, parochial and claustrophobic small town life can be.

The hero of the title is James Parsons, a soldier awarded the Victoria Cross during the Boer War, who returns to his small village in Kent, England, feeling anything but heroic. Five years earlier, he had gone straight from Sandhurst to India and then on to the Cape. Before moving abroad he was betrothed to Mary, who has patiently waited for his return and become much-loved by her soon-to-be parents-in-law in the process.

But when Jamie comes back to England he realises that he has no feelings for Mary. He knows it is his duty to marry her  “and yet he felt he would rather die”. That’s because he is rather obsessed with a married woman he met in India — the wife of his best friend — and though nothing really happened between them he thinks of her all the time.

He paraded before himself, like a set of unread school-books, all Mary’s excellent qualities. He recalled her simple piety, her good-nature, and kindly heart; she had every attribute that a man could possibly want in his wife. And yet—and yet, when he slept he dreamed he was talking to the other; all day her voice sang in his ears, her gay smile danced before his eyes. He remembered every word she had ever said; he remembered the passionate kisses he had given her. How could he forget that ecstasy? He writhed, trying to expel the importunate image; but nothing served.

When he makes the decision to break off his engagement, Jamie unwittingly offends everyone in the village — including his parents — who had only days earlier given him a hero’s welcome.

They had set him on a pedestal, and then were disconcerted because he towered above their heads, and the halo with which they had surrounded him dazzled their eyes. They had wished to make a lion of James, and his modest resistance wounded their self-esteem; it was a relief to learn that he was not worth making a lion of. Halo and pedestal were quickly demolished, for the golden idol had feet of clay, and his late adorers were ready to reproach him because he had not accepted with proper humility the gifts he did not want. Their little vanities were comforted by the assurance that, far from being a hero, James was, in fact, distinctly inferior to themselves. For there is no superiority like moral superiority. A man who stands akimbo on the top of the Ten Commandments need bow the knee to no earthly potentate.

From there, the story twists and turns — will they get back together again? will Jamie track down the woman he truly loves? — as it winds its way towards an utterly shocking and heartbreaking ending.

At its most basic level The Hero is a simple love story gone wrong, which confronts in no uncertain terms the 19th century idea that marriage was a contract between two people regardless of whether they loved one another or not.

On a deeper level, it explores Victorian morality — sexual restraint and a strict social code of conduct under a rigid class system — and shows how it’s not always clear-cut and leads to unhappy outcomes. Jamie’s stance, of doing the “right” thing for him and Mary, highlights the strength of character required to stand up for one’s own convictions in the face of total opposition.

War — and courage — is a metaphor that runs throughout the narrative. From Jamie’s time on the battlefield, he knows that sometimes sacrifices have to be made for the greater good — he applies those same lessons to his love life, even if that means he is seen as being cold and hard-hearted:

The general in battle now is afraid to strike because men may be killed. Sometimes it is worth while to lose men. When we become soldiers, we know that we cease to be human beings, and are merely the instruments for a certain work; we know that sometimes it may be part of a general’s deliberate plan that we should be killed. I have no confidence in a leader who is tender-hearted.

Overall, I really loved this book. The characters, albeit stereotyped, are just wonderful: so parochial and meddling, but with their hearts ultimately in the right place. And it’s written in such a humane way that even though some of them are dreadful busybodies and  full of their own self-importance, you admire their desire to protect Mary’s reputation — at whatever cost.

The Hero is an utterly tragic tale, but Maugham never manipulates his reader’s emotions for effect — instead he builds up a picture of Jamie’s moral dilemma, his inner-most turmoil and the courage required to plough his own furrow — and allows you to come to your own conclusions. It’s a style I like… and I’m delighted there’s so many more Maugham books left for me to explore…

19 thoughts on “‘The Hero’ by W. Somerset Maugham”