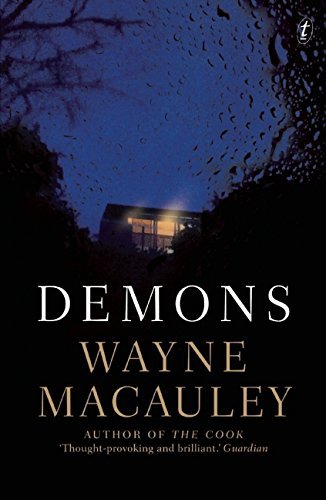 A couple of years ago I read Australian writer Wayne Macauley’s The Cook, a deliciously dark satire about modern gastronomy, which amused and disturbed me in equal measure. Indeed, it was one of the most memorable — and original — books I’ve read in, say, the past four or five years.

His new book, Demons, has just been published in the UK and, for obvious reasons, I was keen to read it.

The narrative, as such, is structured around a group of (annoyingly) middle-class (snobby and pretentious) friends, who spend a  weekend together in a holiday home by the coast on Victoria’s Great Ocean Road. There’s no TV or internet at the property and they’ve all agreed to leave their phones and tablets behind so that they can truly unwind from their busy lives. It’s winter and the weather is rather wild, which makes the getaway rather conducive to sitting around the fire, imbibing wine (there’s a lot of wine in this book) and telling tales.

All right, said Lauren, once everyone was seated in the living room. The sky had darkened and a full moon was rising over the water. The sea was loud, but faraway loud. All right, she said, I’m going to start. My story is called Woman Killed By Falling Man.
Are we going to give them titles? said Evan.
Adam, said Hannah, do you think we should give them titles?
Titles are good, said Adam.
Wait, said Megan. She handed Lauren the piece of driftwood she’d brought back from the beach. The story stick, she said.

The book is structured around these individual tales, each one more ludicrous and outlandish than the last. They span all kinds of dark and edgy themes, including adultery, suicide and murder, with a good smattering of politics, crime and corruption thrown in for good measure.

Most of them are embellished and dramatised to a ridiculous degree, yet no one ever seems to challenge or question the authenticity of what they’re being told. And all the stories, most told second- or third-hand, expose the failings and foibles and prejudices of the people telling them.

There’s some terrific and truly memorable short stories here. In particular, almost two months after having read this book, I’m still thinking about the city couple who have their heart set on buying a farm only to find the farmer doesn’t want to sell it to them. They way in which they resolve this situation is truly shocking — to say the least — and left me feeling slightly ill at ease.

The book’s strength lies in the way in which it shines a light on modern Australia, where everybody should be happy, but no one seems content. Or, as one character puts it, “everyone’s so bloody negative; they can’t see what they’ve got ’cause they think they’re entitled to more”.

Look at us, Ad, said Leon, without looking at him: a bunch of well-off, well-educated fucks, the generation in charge, and yet we don’t know shit. We went to uni, and it didn’t cost us a cent. We found jobs, made careers. We’ve lived off the fat. We saw the world, conquered every corner of it, but what did we ever do but stare at ourselves?  […] We could have done something, left a legacy. But what did we do? Talked crap, argued, bickered, ate, drank — we’re always eating and drinking, stuffing our faces, telling everyone what we had for breakfast, lunch and dinner. It’s obscene. We’ve let the world go to the dogs, Adam.

And so the weekend getaway that is depicted here — with its focus on food and wine and fanciful fireside tales — is a (cleverly written) microcosm of Australian society.

But (the appropriately named) Demons is not so much a novel but a collection of short stories masquerading as a novel and you either like that kind of format or you don’t. Admittedly, I’m not a fan, and while I admire Macauley’s silky and immediate prose style, his masterful way with dialogue and his clever expose on pertinent Australian issues — land rights, refugees, the dream of owning the quarter-acre block, 21 years of economic growth et al — I felt the book was weakened by the format. In other words, the whole is not greater than the sum of its parts. You may beg to differ.

10 thoughts on “‘Demons’ by Wayne Macauley”