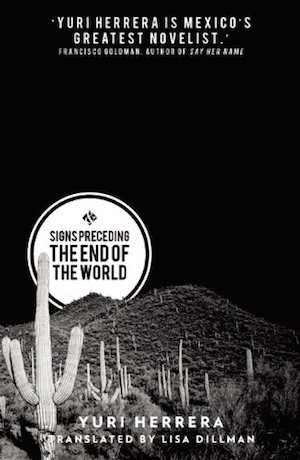 Fiction – paperback; & Other Stories; 114 pages; 2015. Translated from the Spanish by Lisa Dillman. Review copy courtesy of the publisher.

At a time when the world seems increasingly more divided between people who are free to travel around the world, seemingly on a whim, and those who cannot, Yuri Herrera’s Signs Preceding the End of the World is a timely story about illegal border crossings and people smuggling.

This short, sharp and occasionally violent novella focuses on Makina, a young Mexican woman, who crosses the border between Mexico and the United States in search of her brother, who had gone there to “settle some business” for an underworld figure. She carries two messages with her — one from her mother, and one from Mr Aitch (presumably some kind of crime boss) — but her journey is not straightforward.

Along the way she must fight off lust-filled young men (the way she deals with them is quite extraordinary) and gun-toting policemen who patrol the border. But that’s only half her problem: the other half is trying to find her sibling in an unfamiliar country based on sketchy details and few resources — she has no money, no change of clothing, nowhere to stay.

From the above quote, you can see that much of the prose reads like poetry. It’s very stripped back and to-the-point, but without sacrificing beauty or power (clearly a triumph of translation). It plays with language, too — all the underworld figures, for instance, are named after letters of the alphabet, so that you get Mr Aitch, Mr Double-U and Mr Q, and there are “invented” words, such as “verse”, which means to exit — which the translator explains in a highly readable and intriguing note at the end of the novella.

And while Signs Preceding the End of the World is mainly an adventure tale, this is also the kind of book that has layers of deeper meaning — about immigration, patriotism, the black market, exploitation, prejudice and war. In many ways it would make a terrific companion read with T.C. Boyle’s wonderful novel, The Tortilla Curtain, which examines similar issues. Like that book, it looks at what it is like to be a second-class citizen in (supposedly) the world’s richest country — and it doesn’t pull its punches:

We are to blame for this destruction, we who don’t speak your tongue and don’t know how to keep quiet either. We who didn’t come by boat, who dirty up your doorsteps with our dust, who break your barbed wire. We who came to take your jobs, who dream of wiping your shit, who long to work all hours. We who fill your shiny clean streets with the smell of food, who brought you violence you’d never known, who deliver your dope, who deserve to be chained by neck and feet. We who are happy to die for you, what else could we do? We, the ones who are waiting for who knows what. We, the dark, the short, the greasy, the shifty, the fat, the anaemic. We the barbarians.

The story is also ripe with metaphors — the underworld is a constant refrain; the story begins with a sinkhole opening up and ends with a visit to a tunnel — and could be read as an allegory. But for me, it was just a wonderfully rich and tension-filled read.

I also loved the muscularity of the prose. I loved its feisty, determined protagonist. And I loved its themes — epic, biblical, universal — about journeys and belonging and culture. Yet it’s not an easy book to like: it’s confronting, sometimes brutal, often sad and constantly unsettling.

You can find other excellent reviews of Signs Preceding the End of the World at The Guardian and Bookslut.