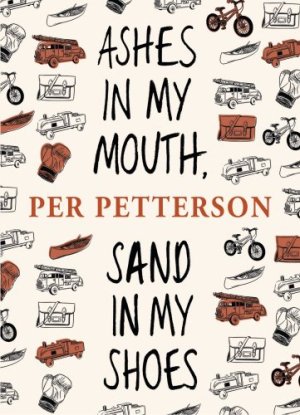 Ashes in my Mouth, Sand in my Shoes, first published in 1987, was Norwegian writer Per Petterson’s first book, yet it was only translated in 2013. Like many other successful authors who write in languages that are not English, his books have been translated out of order. This means that for fans like me — I’ve reviewed most of his work here — we have to read things out of chronological order. Not that it really matters: reading a Per Petterson novel is always a treat, regardless of when it was published, and this one is no exception.

The book, which is beautifully presented with French flaps and high-quality paper, comes in a small format paperback measuring 11.9cm x 16.6cm, making it perfect to fit in a handbag or, in my case, a bike bag. I toted it around with me for about a week and read a chapter each morning as I ate my breakfast having cycled 6.5 miles into work. It was the perfect way to start the day.

In this debut novel, Arvid is a six-year-old boy living on the outskirts of Oslo in the 1960s. His world revolves largely around his working-class parents — his Danish mother, who is a cleaner, and his father, a factory worker — his older sister Gry and his paternal uncle Rolf, who is a socialist.

Structured around 10 self-contained chapters, it reads a bit like a short story collection, but the unifying thread is Arvid’s unique take on the world coupled with his inability to comprehend the adult situations around him. His childhood naivety is utterly endearing, but there are also moments when you realise his honesty may work against him.

For example, in the opening chapter A Man Without Shoes, Arvid’s father loses his job as a foreman in a shoe factory. He goes to Denmark to work in an office but returns six months later because he wasn’t “much of a paper pusher”. His brother Rolf gets him a job in a brush factory making toothbrushes, which he accepts begrudgingly, but even young Arvid knows there is no future in this line of work:

Shoes, on the other hand, there was a lot to say about them. Gym shoes, smart shoes, ladies’ shoes, children’s shoes, ski boots, riding boots. Dad talked a lot about shoes, and he knew what he was talking about. But now it was over. Now you couldn’t even say the word ‘sole’ aloud. If you did Dad would lose his temper.
‘In this house we wear shoes, we don’t talk about them, is that clear!’ he said, and then there was silence, although Arvid could easily see that his mother was annoyed by all the detours they had to take.

Later, his father throws out all the shoe samples and rolls of leather he had been given in his previous job in order to clear space in the cellar. He needs the space to store the toothbrush samples, which he now brings home from work.

‘That’s it, Arvid,’ Dad said with an ugly laugh and his face looked just like a rock. ‘Now I’m a man without shoes!’
‘I know,’ Arvid said. ‘Now you’re a man with toothbrushes!’
And even though he was only one metre fifteen tall and pretty slight, his voice was so heavy with scorn that at first his dad stared at him and then went into the kitchen, and he slammed the door after him.

There are many scenes like this throughout the book in which Arvid says what everyone is thinking. This brings a rare poignancy to the tale, especially when you begin to “read between the lines” and come to understand that Arvid’s father is a difficult, slightly bitter character — he seems to have a fraught relationship with most adults in his life, including his wife, but especially with his brother, with whom he fights, sometimes physically — and even young Arvid, who adores him, is often afraid of him. Whether this explains Arvid’s bedwetting or his nightmares isn’t clear.

As the quotes above should show, it’s written in simple, unadorned prose, and yet the narrative brims with nostalgia and tenderness, and a painful kind of honesty shines through. It shows the world through a six-year-old’s eyes so evocatively and eloquently, it’s hard not to be “wowed” by Petterson’s skill as an author. Although the narrative is disjointed — it reads like a snapshot of Arvid’s childhood at various points in time rather than as one seamless flow working towards a climax — it’s a rather delightful, bittersweet read.

I really enjoyed Ashes in my Mouth, Sand in my Shoes if only to appreciate the book that brought Petterson to Norway’s attention all those years ago.

6 thoughts on “‘Ashes in my Mouth, Sand in my Shoes’ by Per Petterson”