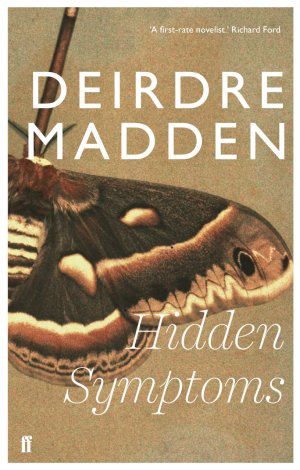 In recent years, Deirdre Madden has become one of my favourite writers. She has 10 novels to her name, but I’ve only reviewed three of them — One by One in the Darkness (published in 1996), Molly Fox’s Birthday (2008) and Time Present and Time Past (2013) — which means I have many years of reading pleasure ahead of me if I space them out accordingly.

Her debut novel, Hidden Symptoms,  first published in 1986, is a densely constructed story about a trio of characters living in Belfast during The Troubles.

It revolves around university student Theresa, a devout Catholic, whose faith is tested by the murder of her twin brother, whose badly mutilated body was found dumped on a patch of waste ground near the city centre several years earlier, the result of sectarian violence.

But the story is just as much about the faith — and the trust — placed in friendships, for Theresa spends most of her time with Robert, a writer and frustrated intellectual, who aspires to better things and despises his sister’s sheltered suburban life, and Robert’s girlfriend, Kathy, a fellow student, who discovers that the father she thought had died when she was a baby is actually living in London with his new young family.

The background to these family dramas — “people marrying, mating and mixing genes” —  is Belfast in the 1980s, a time of great conflict between paramilitary forces, British state security forces and political activists. Yet despite the violence, Theresa views it as “normal” because, as she explains early on in the novel, “she had watched it [Belfast] sink since her childhood from ‘normality’ to its present state”.

What she cannot come to terms with, however, is knowing that someone in the city killed her brother purely because of his religion (he was not known to be a member of any paramilitary organisation). She is plagued by pain, distress and paranoia:

… she arrived too early for an arranged meeting with Kathy in a city-centre pub. She bought a drink and while she waited she looked around at the other customers, the majority of whom were men, until slowly the thought of the man who had killed her brother crept back into her mind. Those men who were laughing in the corner; that man with reddish hair and big, rough hands who was drinking alone; even the white-coated barman, cutting wedges of lemon for gin-and-tonics: any one of them might have done it. She gazed at each of them in turn and thought in cold fright: “Is he the one? Did he do it? Is he the man who murdered Francis?”

The political and religious divide

Admittedly, Theresa is not a terribly likeable person — she’s (understandably) bitter and angry, and all her conversations tend towards the argumentative, particularly where politics is concerned. Her relationship with Robert, initiated in a cafe when she roundly criticises and condemns a piece about Irish literature that he wrote in a magazine, is fraught from the outset but it soon descends into irreconcilable differences because their views on politics and religion are so polarised.

And yet despite her fierce talk and hard-held opinions, there’s a fragility about Theresa that is hard to ignore. Her grief, at times, is palpable, and it is to Madden’s credit that it never descends into maudlin self-pity or sentimentality.

Hidden Symptoms is a short novel — indeed, it was originally published in Faber’s First Fictions anthology where it was awarded the Rooney Prize for Irish Literature in 1987 — but it’s so tightly written it would take an age to unpick all the issues and themes it contains. As a dark exploration of bereavement, faith, love, loyalty and violence, you would be hard pressed to find a book more powerful — or intelligent.