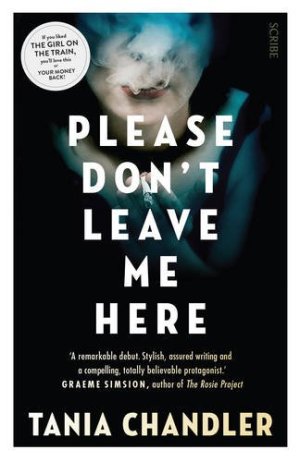 For someone who supposedly likes to champion Australian literature, I’ve not done a very good job of it this year — indeed, I’ve only read two Australian books (a novel and a short story collection) — so when Tania Chandler’s debut novel, Don’t Leave Me Here, arrived unsolicited from her UK-based published, I bumped it to the top of my pile. It proved to be an excellent move, for this psychological thriller is a proper page-turner, one that not only had me guessing right to the end, but gave me goosebumps all along the way…

A puzzle to put together

The story reads very much like a puzzle that Brigitte, the protagonist, is trying to put together in her head, and you, the reader, follow her every step of the way. There’s a murder victim, a hit-and-run accident, a sordid extra-marital affair, a shady past as a stripper, domestic violence, childhood neglect, a police investigation and dreams of Kurt Cobain wearing a brown sweater — and somehow all these “clues” come together in a rather dramatic, and satisfying, ending.

The beauty of the present tense narrative, which is told in the third person but largely from Brigitte’s point of view, is that you’re never quite sure how much you can trust her version of events. Is she the loving wife and devoted mother of twins she purports to be, or is there something more calculating and conniving about her?

The author offers a steady, well-paced drip feed of information that constantly has the reader reassessing their opinion of Brigitte, who goes from being a busy and stressed out young mum one moment, to a woman capable of having sex with a man who is not her husband in her own home, the next. But as her back story is fleshed out, as we come to learn of Brigitte’s troubled past and her uncertain future, there are times when you begin to wonder if Brigitte might simply be paranoid or mentally unbalanced. Is she, perhaps, suffering from some kind of post-traumatic stress disorder? Does she actually need medical help? Is she popping one-too-many painkillers?

I realise I’m not really summarising the plot of this remarkably plotted book. To do so would be counterproductive to those who want to read the story for themselves, because it is the narrative journey — sometimes confusing, often unsettling and always tinged with sadness and regret — that makes Please Don’t Leave Me Here such an exciting read.

I especially like the way the author plays with memory and links it to music — there are lots of music references from the early 1990s in this novel, including a heavy dose of Nirvana and Nick Cave — because we all know that hearing snatches of songs from our past can pull us back to different times and places. The author also explores the notion of whether people alter over time — can a leopard, for instance, really change its spots? And she’s very good at showing how a person, who so desperately seeks normality in her domestic life, can easily slide into an unhealthy mindset following a personal tragedy. This passage, midway through the book, is a good example of a woman going off the rails:

Brigitte pushes a supermarket trolley aimlessly around the plaza. The twisting involved in controlling a trolley hurts her back more than anything, but not today — this morning she took enough medication to stop the pain. She can’t understand why she didn’t think of this before.
Giant gold-and-silver decorations hang from the glass ceiling and she sings along with ‘Winter Wonderland’. She’s done the grocery shopping — extra flour, eggs, and butter for more cakes — and bought wine and the last of the twins’ presents from Father Christmas. Still, she feels she’s forgotten something. If she keeps wandering around, maybe she’ll remember what it was. Something from the chemist? The newsagent? The butcher? The crowd of shoppers is reflected on the ceiling — people walking on the roof. It’s too bright, and she can see auras. A headache claws at the right side of her head; it’s going to turn into a migraine.[…] She gives up trying to remember what she’s forgotten. If it was important, it’ll come back to her. […] Maybe Aiden will join them? No, he’ll spend Christmas with his wife. She thinks about his lips, his deltoid muscles, the tattoo on his arm — whatever it says, his… Stop it. Stop it. Stop it. She shakes her head.
Kurt Cobain walks with her. Sometimes she sees him, but usually he’s just a voice in her head.

All in all, Please Don’t Leave Me Here  is a sexy and stylish debut. It’s dark and intriguing, the kind of story that gets under the skin and leaves you feeling a little dirty and sordid. Interestingly, Tania Chandler is currently working on a sequel. I’m already itching to read it…