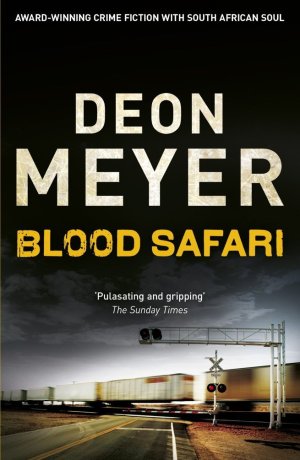 I seem to have been going through an (unplanned) mini South African fiction phase lately — I recently read and reviewed both Doris Lessing’s The Grass is Singing and Damon Galmut’s The Good Doctor — so when I was casting about for something easy to read when on holiday in Australia earlier this month, Deon Meyer’s Blood Safari was a good fit.

In many ways Blood Safari, the author’s fifth book, is an unconventional thriller — the protagonist, Lemmer,  is a bodyguard with a shady past, rather than a policeman or a journalist, for instance — and it’s imbued with a real sense of what it is like to live in modern South Africa, where the past and the present have an uneasy relationship, and where black and white tensions still remain despite the birth of a new nation.

But it also features some typical (or should I say lazy?) clichés: there’s a budding romance between Lemmer and his client, a beautiful young businesswoman, and there’s plenty of gun action, car chases and the like. But, to be honest, those things don’t really matter when you’re in the throes of a master storyteller — and Meyer is, indeed, one of those.

The story, which is a heady mix of politics, environmental activism, corruption and greed, centres on a rich young woman, Emma Le Roux, who believes she has seen her long-dead brother on TV, the prime suspect in a murder case in which four poachers were killed. However, the suspect and her brother have different names, so is Emma merely mistaken or has her sibling been “reborn” under a new identity?

Not long after she contacts the police to tell them of her suspicions, her house is burgled and it seems Emma’s life may be in danger. She hires Lemmer as her bodyguard and then begins her own investigation into her brother’s disappearance, but her probing questions ruffle feathers and she’s thwarted at almost every turn.  When she is put out of action by a serious accident, Lemmer picks up the mantle and finds his own life  is suddenly on the line…

That’s when things really begin to heat up — and when the tone of the story changes from seemingly innocent “detective” work to one of pure vengeance.

Aside from the obvious drama and adrenalin-fuelled narrative, which twists and turns so you’re never quite sure who to trust or who to believe, the book’s unique selling point is its setting: the Lowveld province of Limpopo, where Kruger National Park is located, a region plagued by political unease and ongoing land claims. One character describes it as follows:

This is still the old South Africa. No, that’s not entirely true. The mindset of everyone, black and white, is in the old regime, but all the problems are New South Africa. And that makes for an ugly combination. Racism and progress, hate and cooperation, suspicion and reconciliation . . . those things do not lie well together. And then there’s the money and the poverty, the greed.

The social commentary that runs throughout the story brings to mind the likes of Australia’s Peter Temple, for Meyer is very good at painting a portrait of the deep unease between the Afrikaners and the English speakers, between the police and civilians, between black and white, between the various different black tribes keen to advance economically. He shows how corruption affects almost every level of society and he reveals how tourism —  “the lifeblood of our country, a bigger industry than our gold mines” — has become a monster growing out of control, pitting development against nature in a way that threatens to destroy the very thing the tourists pay good money to see.

Similarly, he also highlights the dangers of “the new wealth”, which is changing attitudes and behaviour, and creating a population — “white, black and brown” — frenzied by consumerism but marked by a deep unhappiness:

I couldn’t understand it. The Russians and the Romanians and the Bosnians would collect their children after the evening karate class and they would say, “This is a wonderful country. This is the land of milk and honey.” But the South Africans complained. They drove smart cars, lived in big houses and seafront flats, they ate in restaurants and bought big flat-screen TVs and designer clothes, yet no one was happy and it was always someone else’s fault. The whites complained about affirmative action and corruption, but they forget that they had benefited from the same for fifty or sixty years. The blacks blamed apartheid for everything. But it was already six years since it had been abolished.

Blood Safari isn’t the perfect thriller, but its mix of social commentary, politics and action gives it an edge over the usual run-of-the-mill fare you might expect in this genre. It kept me entertained on the road for a week or more (at a time when I didn’t want anything too challenging to read) and piqued my interest enough to make me want to explore more of this writer’s back catalogue.