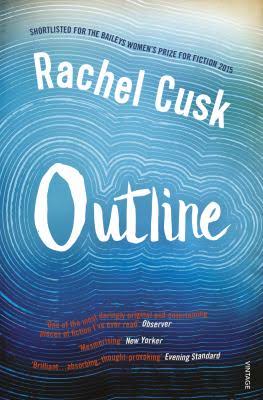 “A story might merely be a series of events we believe ourselves to be involved in, but on which we have absolutely no influence at all.” So says one of the characters in Rachel Cusk’s Outline. I quote it here because it’s an almost perfect description of this novel, which revolves around a passive narrator who listens to an endless string of tales told to her by various people over the course of a working trip to Greece.

There’s the man she meets on the aeroplane, who later takes her on a boat trip, and whom she refers to throughout as “my neighbour”. There is the Irishman, who is also in Greece to teach creative writing. There are her students, some more extroverted than others, who tell her stories based on her prompts. There are her friends, whom she’s met on previous trips. And finally there is the new teacher, who will take over her position when she leaves.

All these varied characters tell our narrator stories about themselves — some more memorable than others, it has to be said — which gives Outline the feel of a short story collection rather than as one, cohesive novel.

Admittedly, I found myself drawn into these individual tales even though I can’t recall the details of them just a week or two after having read the book. Perhaps it’s enough to recall that they were often about big life events, such as marriage, having a family and building a career.

Perhaps the most interesting element is the way in which Cusk litters these stories with references to the art of writing, so that, for instance, mixed messages between people are seen “as a cruel plot device that did sometimes have their counterpart in life” and that the love between a man and a woman “is what you perhaps would call the storyline”. The man she meets on the plane goes so far as to tell her that “a life with no story was not, in the end, a life that I could live”.

But one also has to wonder if Cusk isn’t actually playing a joke on her reader, for in using a narrator who is deliberately passive, you realise that she’s subverted the normal mechanics of the novel and you’re left to take the writing completely on its own terms. Or, as the narrator puts it herself:

I had come to believe more and more in the virtues of passivity, and of living a life as unmarked by self-will as possible. One could make almost anything happen, if one tried hard enough, but the trying – it seemed to me – was almost always a sign that one was crossing the currents, was forcing events in a direction they did not naturally want to go, and though you might argue that nothing could ever be accomplished without going against nature to some extent, the artificiality of that vision and its consequences had become – to put it bluntly – anathema to me. There was a great difference, I said, between the things I wanted and the things that I could apparently have, and until I had finally and forever made my peace with that fact, I had decided to want nothing at all.

Cusk’s writing style is occasionally showy, but mostly it has a weightless kind of quality, so that it slips down rather effortlessly. While the dialogue  — of which there is a lot — is rather forced and unrealistic, the scene setting is excellent, so that Athens in the summer comes very much alive in her hands, as the following quote will attest:

At evening, with the sun no longer overhead, the air developed a kind of viscosity in which time seemed to stand very still and the labyrinth of the city, no longer bisected by light and shade and unstirred by the afternoon breezes, appeared suspended in a kind of dream, paused in an atmosphere of extraordinary pallor and thickness. At some point darkness fell, but otherwise the evenings were strangely without the sense of progression: it didn’t get cooler, or quieter, or emptier of people; the roar of talk and laughter came unstaunched from the glaring terraces of restaurants, the traffic was a swarming, honking river of lights, small children rode their bicycles along the pavements under the bile-coloured streetlamps.

But despite the “experimental” nature of the book and the intelligence (and wit) that resonates off the page, overall Outline, for me, fell somewhat flat. I came away from it knowing I’d enjoyed the experience of reading it, but mostly I felt ambivalent about its strange, yet rather ordinary, contents.

Outline was shortlisted for this year’s Bailey’s Women’s Prize for Fiction, and this year’s Giller Prize, the winner of which will be announced next week.

16 thoughts on “‘Outline’ by Rachel Cusk”