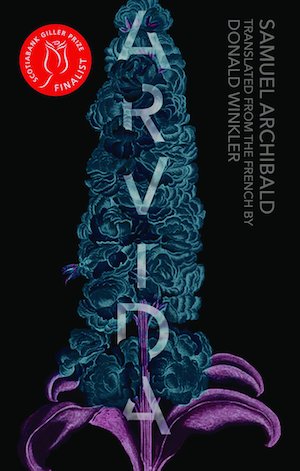 I would not normally describe myself as a short story fan — my preference is usually for novels or novellas — so it came as somewhat of a surprise that I enjoyed Samuel Archibald’s Giller Prize shortlisted Arvida so much. In fact, I championed this one to win the Shadow Giller Prize, when the jury cast their votes on Friday, because there was something about this volume, a glorious mix of ghost stories, road stories, family tales and rural folklore, that really grabbed me.

It may have been the fact that pretty much all of the stories — there are 14 in all — have a distinctly Canadian feel (many are set in the author’s home town of Arvida in Quebec) and that they were written in such an immediate style (by which I mean they transport the reader effortlessly to times and places that feel so real you could touch them). Or perhaps it’s just that having read a string of rather so-so books on the Giller shortlist ( with one exception, that being Martin John, which we have selected as our Shadow Giller winner), I was waiting for one that had the “wow” factor. It just turned out that this was the last one on my reading list, proving that the saying “last but by no means least” is, indeed, true.

Tales that draw you in

Each story in the collection, expertly translated from the French by the Donald Winkler, is rounded and complete, drawing you into a world which is sometimes fantastical (in A Mirror in the Mirror a woman wastes away in a lonely house waiting for her husband to return from Montreal, where he has gone to “chase his artistic ambitions”); sometimes scarily surreal (Jigai, the only story set outside of Canada, is about ritual mutilation between Japanese women); and sometimes downright tawdry (in América, two losers foolishly agree to smuggle a Costa Rican women across the border into the US just after the 9/11 attacks when border control is on high alert).

It also features two series of interlinked stories — Blood Sisters I, II and III, about one family’s secret history, and Arvida I, II and III, which all begin with the words: “My grandmother, mother of my father, always said”, which have the ring of autobiography about them.

The stand-out story — in what is a collection of exceptionally good and occasionally extraordinary stories — is the penultimate one titled House Bound, a terrifically slow-burning haunted house tale that oozes paranoia and reads like something Stephen King might have written. (I suspect Archibald is a fan, because in the next story, which reads like non-fiction, he claims that as a child he used to type out stories by Stephen King, whom he describes as “the world’s coolest writer at the time”.)

In it the narrator buys a dilapidated house once owned by three generations of a well-to-do family whose fortunes have fallen by the wayside and renovates it to create the dream home he’s always wanted. But his wife and young daughter feel uncomfortable in the house and believe it is haunted. This belief is further cemented when the narrator finds a hidden room up in the loft, which has a pentagram, or “devil’s symbol”, drawn on the floor. When the family dog later disappears and is found floating, mutilated, in water at the bottom of a nearby cliff one can’t help fearing that things are only going to get worse…

The challenge of writing

The final story, Madeleines, draws on the idea that Proust’s entire In Search of Lost Time begins with a man remembering his whole childhood by merely tasting a little cake, but for the author, who wants to be a writer but does not know how — “the only story that comes back to me from taking a bite of something has to do with a mouthful of McNugget” — this seems like an impossible task. And yet in writing this story, of how it is difficult to write stories, he has written one that shows how stories are all around us if we care to look. And in writing this particular tale, he shows in a deceptively clever way, how the entire volume of Arvida came into being. Reading it made all the pennies of the previous 200 or so pages fall into place for me, and I came to the last page only wanting to turn right back to the start to read it all over again. If that’s not the sign of a good book, I’m not sure what is.

Unsurprisingly, Arvida has already won a literary prize — the Prix Coup de Coeur Renaud-Bray in 2012 — and on Tuesday we will find out whether it takes the 2015 Giller Prize as well. If it does, it will be the first translated work to win the award.

For another take on this collection please see Roughghosts’ excellent review.

4 thoughts on “‘Arvida’ by Samuel Archibald”