Earlier this year I read the 2015 Giller Prize-winning Fifteen Dogs by André Alexis and I thought that may well put me off reading anything about fictional canines ever again. And then I picked up Sara Baume’s Spill Simmer Falter Wither — which had been sitting on my bedside table since February — and I had to reassess my prejudice against dogs in literature, for in this beautifully written debut novel we follow the up-and-down relationship between one man and his dog, and it is truly an impressive achievement.

A year in the life of a man and his dog

Split into four seasons — the spill, simmer, falter, wither of the title — the book charts a year in the life of 57-year-old Ray, a social misfit, who buys a rescue dog — “a vicious little bugger” but a “good ratter, alright” — with one eye whom he dubs, appropriately,  “One Eye”:

You’re all on your own in a solitary confinement kennel by the recycling bins. […] You growl as the kennel keeper grabs you by the scruff and buckles the collar, but you don’t snap. And when you walk, there’s no violence, no malice in the way you move. There’s nothing of the pariah I expected. You are leaning now, nearly dragging your body along the ground, as though carrying a great lump of fear. ‘Easy now,’ the kennels keeper tells you. ‘Easy.’

Initially, Ray and One Eye take their time getting used to one another, but as the weeks and months unfurl a strange kind of companionship ensues, and Ray, alone in the world for the first time after the recent death of his father, begins to find the courage to explore beyond the small, closeted domain he has inhabited his whole lonely life.

But Ray’s cautious baby steps into new territory beyond his local village brings him into conflict with other people, and when One Eye displays the viciousness which had once made him useful for badger baiting, Ray panics and goes on the run, taking his beloved dog with him… 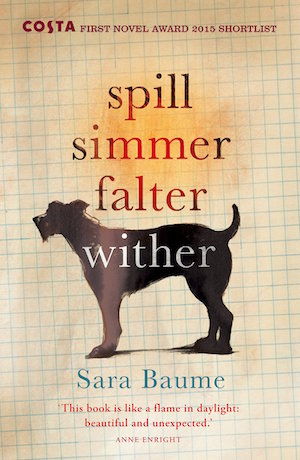 A portrait of loss and loneliness

This rather sad yet beautiful story is very much a portrait of loss and loneliness and the ways in which a loyal animal can bring joy and comfort into our lives. But it’s also a dark and disturbing look at what can happen to those people who fall through the cracks, who never fit in and are misjudged or cast out by society at large.

The writing is so eloquent and word-perfect, full of wonder and unexpected descriptions, especially of nature and the changing seasons, that it is an absolute delight to read from start to finish. And this is no mean feat given the narrative is written largely in the second person (Ray addresses everything to the dog) and in the present tense, which, in another writer’s hands, may have become tedious and wearing.

I was constantly surprised by the vividness of just the smallest detail, whether that be of Ray’s perplexed emotions or of the landscape he travels through, and I had to stop myself from underlining everything that resonated with me, otherwise I would have underlined the whole damn book.

Here’s a  good example of how Baume paints an arresting picture of what Ray sees through the car window, for instance:

Interrupting the fields, there’s a golf course and a purposeless dispersal of bungalows. Barns, cars, bales and trees. Cows moving as imperceptibly as the hands of a clock, getting there without ever seeming to go. Now look out and see the ocean; the ocean’s interruptions. There’s a hunk of grassy rock all covered in cormorants. A lobster buoy. Sail boats very far away. A blue gallon drum, presumably attached to something beneath the surface. And a cargo ship passing a floating lighthouse on its way into harbour.

Over the course of the novel, it’s rewarding to see shy, nervous, never-quite-sure-of-himself Ray forging a genuine friendship with One Eye, perhaps the first true friendship he’s ever experienced. There’s a quiet, unbridled joy in the storyline, but this is soon surpassed by an undercurrent of unease and menace, which leads the reader towards a rather shocking, my-goodness- I-didn’t-see-that-coming conclusion.

This is a truly memorable and haunting read, bringing to mind the likes of Patrick McCabe’s The Butcher Boy and Claire Keegan’s Antarctica, and marks Sara Baume as an exciting Irish talent to watch.